Why the fake Iranian plot?

… and to distract you from operation ‘Fast And Furious’! 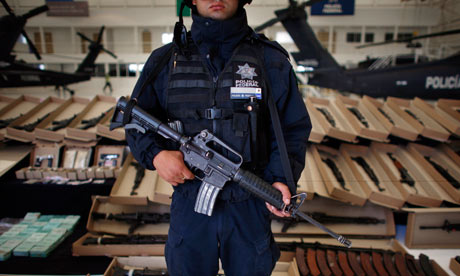 Weapons seized from the Zetas drug cartel. A gang member recruited to an alleged Iranian plot was a US informant. Photograph: Miguel Tovar/Associated Press

The Iranian plot the US government says aimed to murder Saudi Arabia’s ambassador to Washington allegedly fell down because a member of the Mexican Zeta drug cartel hired to carry out the job for $1.5m was actually a US informant.

The informant told the Drugs Enforcement Agency (DEA) in May that he had been contacted by alleged Iranian agent Manssor Arbabsiar. They held several meetings in Mexico which were taped. Methods discussed reportedly included a targeted assassination and a bomb.

Arbabsiar flew to Mexico in late September allegedly to serve as a guarantee that full payment would follow the assassination. The Mexican government has confirmed that it denied him entry and put him on a flight with a stopover in New York, where he was arrested.

The Zetas are one of main protagonists in Mexico’s bloody drug wars, where they are fighting rival cartels and a military-led offensive. Their stronghold is the north-eastern state of Tamaulipas, just over the border from Texas. They also have a presence in Guatemala. The cartel is said to operate trafficking routes into Europe as well as the US.

Arbabsiar and the DEA informant also reportedly discussed bombing the Israeli embassy in Washington and the Saudi and Israeli embassies in Argentina, as well as opening Zeta trafficking routes for opium from the Middle East through Mexico.

The Zetas are not known for bomb attacks, but have been accused of some of the worst atrocities of the drug wars. These include an arson attack on a gambling centre in the city of Monterrey in August this year that killed 52 people.

The cartel has diversified beyond drugs into extortion and industrial-scale kidnapping of US-bound Central American migrants.

The group was formed in the late 1990s by army deserters recruited by the Gulf cartel to increase its muscle. The Zetas grew in size and accrued more autonomy over the years. The Gulf and the Zetas split in early 2010 and are now enemies.

The Zetas revolutionised cartel enforcement with their superior training and operational planning, a focus on weaponry, willingness to use extreme cruelty and disregard for who might also get killed aside from the original target.

The other main cartels in Mexico have since formed similar units, helping to ensure that the drug wars in the country are both particularly brutal and hard to stop with the kind of inter-capo pacts that have contained underworld rivalries in the past.