– Former White House Advisor & UBS Global Strategy Deputy Head And CFR Member: The Germans Announce They Are Re-Introducing The Deutschmark – They Have Already Ordered The New Currency And Asked That The Printers Hurry Up

Flashback on Bilderberg Papandreou and his elitist friends:

– The Papas And The Papas: Greece’s First Family 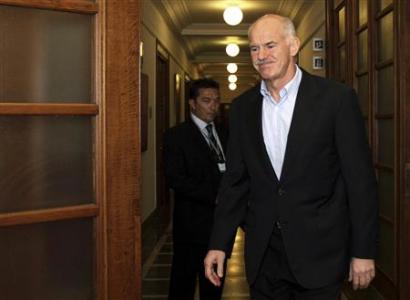 The country’s deficit this year is expected to reach 8.5 percent of gross domestic product, or euro18.69 billion ($25.2 billion) — higher than the targeted euro17.1 billion ($23.1 billion), which would have been 7.8 percent of GDP, the ministry said.

Greece will miss a deficit target set just months ago in a massive bailout package, according to government draft budget figures released on Sunday, showing that drastic steps taken to avert bankruptcy may not be enough.

The dire forecasts came while inspectors from the International Monetary Fund, EU and European Central Bank, known as the troika, were in Athens scouring the country’s books to decide whether to approve a loan tranche. Without that installment, Greece would run out of cash as soon as this month.

The 2012 draft budget approved by cabinet on Sunday predicts a deficit of 8.5 percent of gross domestic product (GDP) for 2011, well short of the 7.6 percent target.

The 2012 deficit is set to meet a nominal target of 14.6 billion euros, but at 6.8 percent of GDP it falls short of a target of 6.5 percent, because the economy will shrink further.

“Three critical months remain to finish 2011, and the final estimate of 8.5 percent of GDP deficit can be achieved if the state mechanism and citizens respond accordingly,” the Finance Ministry said in a statement.

European officials are scrambling to avert an abrupt Greek bankruptcy, which would wreck the balance sheets of European banks, jeopardise the future of the single currency and potentially plunge the world into a new global financial crisis.

European Union officials say the troika’s assessment of Greece’s future prospects could determine whether it needs to demand more debt relief from private creditors, a measure that could effectively amount to default.

In Sunday’s documents, GDP is predicted to fall by 5.5 percent this year. Government sources said it was expected to shrink 2-2.5 percent next year.

Those numbers are in line with recent forecasts by the IMF, but much worse than predictions used to calculate a 109 billion euro ($146 billion) bailout in July, which anticipated Greece posting 0.6 percent growth next year.

The shortfall in the 2011 deficit target means Greece would need almost 2 billion extra euros just to finance its expenses for this year. It also means additional emergency tax hikes and wage cuts announced in the past two months to hit the target have not been enough to put Greece’s finances back on track.

“The vicious circle continues for the government,” said Yannis Varoufakis, economic professor at Athens University. “We have disappointing revenues, missed targets and this will bring new measures and new austerity.”

To persuade the troika to release the next tranche of loans, Greece has promised to raise taxes, cut state wages and speed up plans to reduce the number of public sector workers by a fifth by 2015.