The US government really needs to further control the internet before the greatest financial collapse in world history happens, because this may not be good enough: 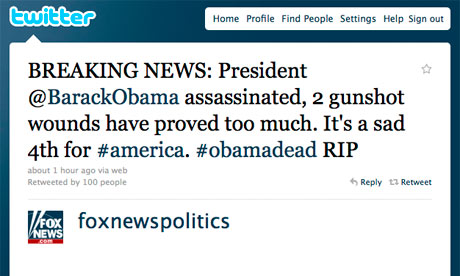 @foxnewspolitics began tweeting the information to its 33,000 followers at about 2am local time, with the posts rapidly being shared around the internet.

The following tweets all related to the supposed death of Obama, with some posts being very specific about the president’s injuries.

“@BarackObama has just passed. The President is dead. A sad 4th of July, indeed. President Barack Obama is dead,” came the first tweet. The string of messages continued:

“@BarackObama has just passed. Nearly 45 minutes ago, he was shot twice in the lower pelvic area and in the neck; shooter unknown. Bled out”, and then: “@BarackObama shot twice at a Ross’ restaurant in Iowa while campaigning. RIP Obama, best regards to the Obama family.”

Whatever the hoaxer’s identity, they do not appear to have been entirely web-savvy. The first three posts revealing the president’s death were directed to the @BarackObama Twitter feed, meaning only those following both accounts would have seen the messages.

The unknown tweeter appeared to realise the error of their ways, switching tack to post three more tweets that would have been seen by all followers:

“#ObamaDead, it’s a sad 4th of July. RT to support the late president’s family, and RIP. The shooter will be found;

“We wish @joebiden the best of luck as our new President of the United States. In such a time of madness, there’s light at the end of tunnel.”