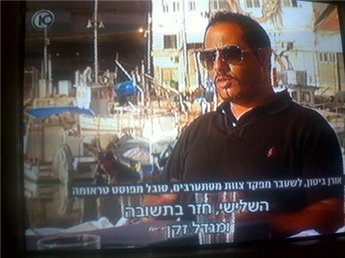 Oren Beaton presented a photo album of Palestinians he killed during his time as a commander of an undercover Israeli unit operating in the northern West Bank city of Nablus.

Beaton explained that he kept photos of his victims.

“This is a photo of a Palestinian young man called Basim Subeih who I killed. This is another young man. I shredded his body, and the photo shows the remnants of his body,” he said.

He complained of suffering from post traumatic stress disorder and said that the state had rejected his demands for compensation.

The Channel 10 presenter appealed to the Israeli government to meet the agent’s demands.

“Those are the Shin Bet agents we only hear about and never see, and thanks to them we live safely,” she said.

The report was filmed in the Palestinian territories, and showed agents wandering around the streets of Ar-Ram in occupied East Jerusalem with handguns under their shirts, illustrating that the agents were still operating in Palestinian cities.

The agents, who speak fluent Arabic, are shown surrounded by masked Palestinian collaborators secretly deployed to the area to protect them.

The program provided previously unconfirmed details about the operational methods of undercover agents.

The report explained that officers conducted surveillance before an assassination, investigating the target’s friends and classmates.

Agents would even ask about the target’s favorite meals and habits at home, the report said.

In this way, agents would put together an image of the target’s behavior and routine.

Agent “D” said officers would then “seize the target and wait until the commander arrives to confirm his identity. Then we shoot him.”

This confirms previous accounts from Palestinians who have said they witnessed Israeli agents shooting Palestinians at point-blank range.