– Fukushima City To Give 34,000 Radiation Dosimeters To Children, So That They Can Wear Them Around The Clock

Some anecdotes I picked up from Japanese blogs and tweets about Fukushima Prefecture that seems to agree with what Professor Kunihiko Takeda of Chubu University has been saying all along, that schools are forcing children to be exposed to more radiation. I do not vouch for accuracy.

And then, there is this news that has been reported widely in Japan as something “good”: Cities and towns in Fukushima Prefecture are fitting children – kindergarteners, elementary school children, and junior high school children – with radiation monitoring badges to keep track of the external radiation that they will receive.

I wrote about it on June 10, when Date City in Fukushima Prefecture decided to fit the young children with “dosimeter”. I didn’t like the news, as I thought they’d better move those children from places where the radiation monitoring was necessary.

Then I found out that these radiation monitoring devises (which was described in the news as “dosimeter”) were not the kind that beeps when high radiation is detected. It is just a badge to record the cumulative external radiation that the wearer is exposed to, usually in one month. It doesn’t help small children or their parents avoid high-radiation “hot spots”. It just records how much radiation that children receive as they continue to live and play in the elevated radiation environment.

Schools doing all they can to keep children coming to schools and playing outdoors, and the prefectural and municipal governments fitting them with radiation monitoring badges to record the cumulative radiation.

Children in Fukushima seem to have been turned into subjects of a radiation research.

For these kids in Kawamata-machi in Fukushima Prefecture, Kinki University in Osaka has donated those badges. The University is noted for its cancer research. 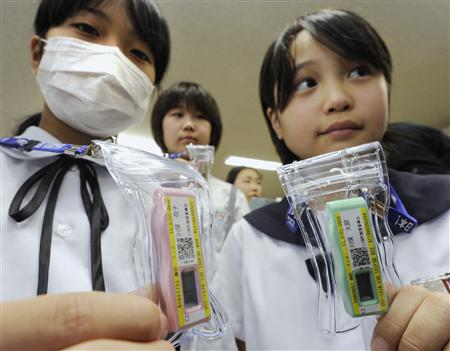