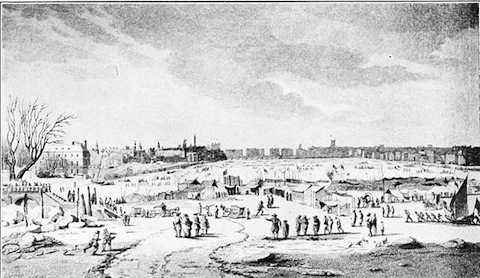 1. Well I’ve never ice-skated on the Thames. Have you? Also, I’d be quite interested to hear what that “expert” has to say: the one at Alan Howard’s Downing College climate conference who blithely assured us that 17th frost fairs had NOTHING to do with the Little Ice Age. (It was all because the Thames flowed in a much more turgid way back then, apparently….)

2. People will no longer merely be mildly irritated at the way their landscape has been disfigured by bat-chomping eco-crucifixes for rent-seeking toffs (aka wind farms) in the name of saving us from “global warming.” They will be incandescent. Lynch-mob incandescent.

3. As the starving polar bears march southward on the new sheet ice now extending from the North Pole to Gibraltar, desperate citizens will be forced to make tough decisions about which sacrificial victim should be fed next to the ravening beasts so that they leave the rest of us alone. Happily I have a suggestion. His name is Richard Kemp and – apparently – he is Vice Chairman of the Local Government Association. And among his taxpayer-funded functions – again, apparently – is to give quotes to newspapers telling us how grateful and happy we should be that our bins will now be emptied less often.

4. Never in our lifetimes will we have to read another tendentious story about how daffodils are coming up three months earlier than usual/lambs are being born in December instead of spring/wildebeeste could soon be migrating across Salisbury Plain as a result of “global warming.”

5. The 10-foot maneating Oceanic Whitetips which have been drawn to Cornwall’s waters by the Concept Formerly Known As Global Warming will now be replaced by 30 foot maneating Greenland sharks. Which will kind of serve the Cornish right for being such impassioned early adopters of wind farms.

6. New edicts will be issued by world leaders including President Ryan of the US, Prime Minister Farage of Great Britain and Aussie premier Plimer, scrapping High Speed Rail, abandoning all renewable energy schemes (apart from, maybe, hydroelectric) and making the ownership of 4 x 4s or similar gas-guzzling vehicles compulsory by 2015. Stringent punishments to be introduced for those whose carbon footprint falls below a certain agreed minimum level.

7. Monbiot the Musical (libretto: James Delingpole; music: James MacMillan) – a light-hearted celebration of one of the late 20th century’s great comic figures – opens simultaneously on Broadway and in the West End to enormous acclaim.

8. Woolly mammoth steaks are said to be surprisingly delicious. They taste like chicken, apparently.

9. Britain now stands a reasonable chance of cleaning up in the medals at the 2022 Winter Olympics. As, unfortunately, do Jamaica, Bora Bora, Egypt and, of course, the 2022 Olympics’ host nation, Dubai.

10. The Prince of Wales, Al Gore, Rajendra Pachauri, James Hansen, Paul Ehrlich, David Cameron, Leonardo Di Caprio, Ed Begley Jr, Sir P Nurse of the Royal Society and Britain’s second most famous celebrity mathemetician Simon Singh will be among the many former Warmists who put their names to a grovelling apology published in all the world’s newspapers explaining how incredibly bad and stupid they feel for all the economic damage they have inflicted, all the careers ruined, all the unnecessary fear promoted as a result of their misguided promotion of the “Man-Made Global Warming” myth. Yeah, right. Hell will freeze over before that happens. But wait: what are all those spike-tailed, horned, red figures doing gliding on blades across the surface of the Styx?