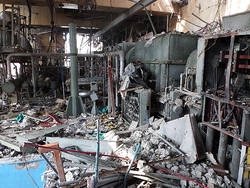 Tokyo Electric Power Co. (TEPCO) has released a photograph showing the damaged inside of the building housing the No. 4 reactor at its crippled Fukushima No. 1 Nuclear Power Plant.

In the photo, which was released on June 11, the pipes and walls near a power generator inside the structure are charred black, and rubble covers the floor.

Earlier the company had released footage showing work to remotely measure the temperature of the pool for spent fuel at the No. 4 reactor, but the latest photo marks the first time since the March 11 earthquake and tsunami for the company to release a picture showing the inside of the reactor building.

The No. 4 reactor was hit by a hydrogen explosion on March 15, as well as fires on two occasions. The generator in the structure was used for a reactor recirculation pump and is thought to be the source of the fires.

1 thought on “TEPCO Finally Releases FIRST Photo Inside Of Reactor No. 4: Pipes And Walls Are Charred Black, Rubble Covers The Floor”