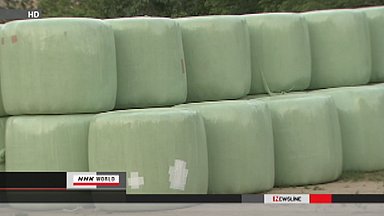 A radioactive substance exceeding the legal limit has been detected in pasture grass in Miyagi Prefecture, neighboring Fukushima Prefecture in which the damaged nuclear plant is located.

1,530 becquerels of radioactive cesium per kilogram were found in a sample collected last Wednesday from a farm operated by the southern town of Marumori. The figure exceeds 5 times the legal limit of 300 becquerels.

350 becquerels of cesium were also detected in a sample from a prefectural farm in the northern city of Osaki.

Miyagi prefectural government has asked about 6,000 livestock farmers across the prefecture not to feed pasture grass to livestock and not to put cattle out on grazing land.
This is the first time radioactivity exceeding the legal limit has been found in grass or vegetables in the prefecture.

Meanwhile, in the sample from Marumori, 40 becquerels of radioactive iodine per kilogram were detected. The figure is below the legal limit of 70 becquerels.

In the sample from Osaki, no iodine was detected.