See the related info below.

Mobile phones and computers with wireless internet connections pose a risk to human health and should be banned from schools, a powerful European body has ruled. 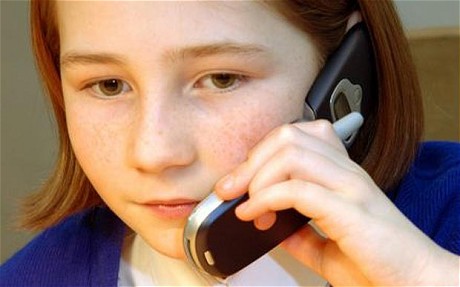 Mobile phones and wireless networks should be banned in school, a European body has ruled. Photo: REX FEATURES

A Council of Europe committee examined evidence that the technologies have “potentially harmful” effects on humans, and concluded that immediate action was required to protect children.

In a report, the committee said it was crucial to avoid repeating the mistakes made when public health officials were slow to recognise the dangers of asbestos, tobacco smoking and lead in petrol.

The report also highlighted the potential health risks of cordless telephones and baby monitors, which rely on similar technology and are widely used in British homes.

Fears have been raised that electromagnetic radiation emitted by wireless devices can cause cancers and affect the developing brain.

The findings were seized on by campaigners who oppose the spread of wireless devices.

The committee concluded that member states should:

• Set thresholds for levels of long-term exposure to microwaves of the type emitted by mobile phones;

• Introduce clear labelling on products indicating the presence of electromagnetic fields and any health risks associated with use;

• Ban all mobile phones and wireless networks in classrooms and schools;

• Run information campaigns aimed at children and young adults about the risks to human health;

• Step up research on less-dangerous types of antennae and mobile phones.

The conclusions contradict advice from the World Health Organisation and the Department of Health, which says exposure to electromagnetic fields poses little or no risk to human health.

The Council of Europe, which has 47 member states and is based in Strasbourg, cannot impose its will on governments, but is highly influential in policy-making and has often seen its decisions enacted through conventions and treaties.

A draft resolution – calling on governments to “take all reasonable measures to reduce exposure to electromagnetic fields” from mobile phones and similar devices, including the ban in schools – was adopted unanimously by the organisation’s Committee on the Environment, Agriculture and Local and Regional Affairs.

The committee is composed of 84 MPs and politicians from member states, and its vice-chairman is Lord Prescott, the former Deputy Prime Minister. Its members reviewed the latest research on the effects of electromagnetic fields and took fresh evidence from experts before reaching its conclusions.

The draft resolution will now go before the council’s full Parliamentary Assembly for approval.

Public health and telecommunication experts are divided on the dangers posed by mobile phones and other wireless devices.

A report by Britain’s Mobile Telecommunications and Health Research Programme in 2007 said that there was no association between mobile phones and adverse health effects, but it is now conducting a more detailed study into the long-term effects of mobile phones.

Other researchers have found no association between short-term mobile phone use and cancer. A major epidemiological study published last year found no increased risk of cancer from using mobile phones over a ten-year period.

Prof Les Barclay, the vice-chairman of the Mobile Telecommunications and Health Research Programme, said: “We haven’t had mobile phones for very long and there are now studies going on to look for longer-term effects.

“There is very little evidence at the moment for harmful effects. The powers that mobile phones emit are getting less and less, and they are well below the limits set by the International Commission on Non-Ionising Radiation Protection. Banning mobile phones and wireless networks in schools is a step too far in my eyes.”

Prof Paul Elliot, of Imperial College, London, who is leading a major international study of the long-term effects of mobile phone use on 200,000 people, said: “There are potential questions about whether mobile phones might have cognitive effects and impact on sleep.

“Mobile phone technology is clearly incredibly beneficial and useful, but we have to weigh up those potential health effects, so it is responsible to do research on that. In children, that research has not yet really been done, so we need more research in this area. In the meantime the advice is not to be excessive in use.”

Powerwatch, a campaign group that aims to raise awareness of the risks from electromagnetic fields, welcomed the draft resolution. A spokesman said: “It is long past the time when governments all around Europe should have started being more precautionary about these issues.”

Russell Hobby, general secretary of the National Association of Head Teachers, warned that a ban on mobile phones and wireless networks in schools would bring widespread disruption.

He said: “The impact on schools would be enormous. Most schools have Wi-Fi networks now, while pupils and teachers carry mobile phones. Many schools are shifting towards far more mobile computing so pupils can have laptops they can take home to do their homework on. This would prevent all of that.”

A Department of Health spokesman said: “As you would expect, we keep all available scientific evidence under review. Our guidance remains the same. Children should only use mobile phones for essential purposes and keep all calls short.”