… and now a complete blackout during the raid: 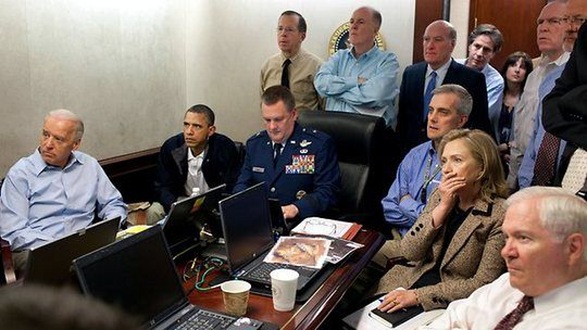 Leon Panetta, director of the CIA, revealed there was a 25 minute blackout during which the live feed from cameras mounted on the helmets of the US special forces was cut off.

A photograph released by the White House appeared to show President Barack Obama and his aides in the situation room watching the action as it unfolded. In fact they had little knowledge of what was happening in the compound.

In an interview with PBS, Mr Panetta said: “Once those teams went into the compound I can tell you that there was a time period of almost 20 or 25 minutes where we really didn’t know just exactly what was going on. And there were some very tense moments as we were waiting for information.

“We had some observation of the approach there, but we did not have direct flow of information as to the actual conduct of the operation itself as they were going through the compound.”

Mr Panetta also told the network that the US Navy Seals, rather than Mr Obama, made the final decision to kill bin Laden.

He said: “The authority here was to kill bin Laden. And obviously, under the rules of engagement, if he had in fact thrown up his hands, surrendered and didn’t appear to be representing any kind of threat, then they were to capture him. But they had full authority to kill him.

“To be frank, I don’t think he had a lot of time to say anything. It was a firefight going up that compound. And by the time they got to the third floor and found bin Laden, I think it – this was all split-second action on the part of the Seals.”

The President only knew the mission was successful after the Navy Seals commander heard the word “Geronimo” on the radio, a code word from commandos reporting that they had killed bin Laden.

The absence of footage of the raid has led to conflicting reports about what happened in the compound. According to Pakistani authorities one of bin Laden’s daughter’s, who was present during the raid, claimed that her father was captured alive before he was killed.

There was also growing doubt about the US claims that Pakistan’s intelligence agencies involved in the raid.

Lieutenant General Asad Durrani, former head of the ISI, Pakistan’s intelligence service, said it was “inconceivable” that his government was unaware of the US raid on Osama bin Laden’s compound.

He claimed his country was forced to deny any knowledge of the raid to avoid a domestic backlash. The ISI’s official line has been that bin Laden’s compound had “slipped off our radar” after it raided the building in 2003 while hunting for another senior al-Qaeda operative.The agency claims it was unaware that bin Laden was hiding there.

Lieutenant General Durrani, however, said that the denial was a “political” maneuver by the intelligence services to avoid claims that they were working too closely with the US.

He said: “It is more likely that they did know [about the raid]. It is not conceivable that it was done without the involvement of Pakistani security forces at some stage. They were involved and they were told they were in position.

“The army chief was in his office, the cordons had been thrown around that particular place. The Pakistani helicopters were also in the air so that indicates that it was involved.

“[There are] political implications back home. If you say that you are involved there is a large, vocal faction of Pakistani society that will get very upset because we are carrying out repeatedly these operations with the Americans.”