–  Everything Is Now Correlated Exclusively To The Federal Reserve’s Balance Sheet: If The Fed Ends QE2 On June 30, The Market Collapse Will Be Epic 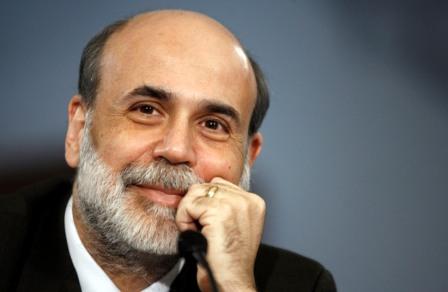 During a historic news conference, Bernanke also said the Fed’s first step toward tightening U.S. monetary policy would probably come when it stops reinvesting its securities proceeds. He did not say when the Fed might make that decision, only that it would depend on the economic outlook and the pace of inflation. He said that for now the Fed would continue to reinvest the proceeds of maturing bonds to maintain the size of its large portfolio.

His comments came Wednesday after Bernanke did something no Fed chief has ever done: He strode into a large, wood-paneled conference room full of reporters at Federal Reserve headquarters, sat down at a wooden desk, read prepared remarks on the results of the Fed policy committee meeting and then began taking questions. It was the first time in the central bank’s 98-year history that its chairman took routine, on-the-record questioning from the media.

Bernanke used technical language to respond to the first question— on the economic growth estimate in the first quarter. He said he thought that most of the factors slowing the recovery appear to be “transitory,” including lower defense spending, weaker exports (which he said he expects will “pick up” again soon) and the weather.

But his demeanor became chattier and his vocabulary simpler as he fielded questions on recent criticism of Fed policy: that the Fed is pushing the dollar down and reducing the nation’s standard of living and that many Americans are worried about rising gas and food prices.

“Higher gas prices are absolutely creating financial hardship for a lot of people,” Bernanke said. “Gas, of course, is a necessity. . . . It’s obviously a bad development.”

He explained why in the most basic of terms: Higher gas prices make “economic developments less favorable. On the one hand, they add to inflation. On the other, by draining purchasing power from households, they are also bad for the economy. But he said that he expects oil prices to stabilize or drop.

The news conference began just a few hours after the Fed announced that it would end its program of pumping hundreds of billions of dollars into the economy in June but would keep interest rates near zero for the foreseeable future. Fed officials also downgraded their expectations for economic growth this year and projected lower unemployment and higher inflation compared with their January forecast.

In responding to criticism that the Fed’s monetary easing policy has not done enough to bring down unemployment to sustainable levels, Bernanke said, “We were very clear this was not going to be a panacea.”

The news conference was a deliberate strategy by Fed leaders to try to polish the board’s public image, shelve its traditional mystique and clarify how and why it makes policy decisions. The Fed has come under repeated attack by members of Congress in the past two years, in part for its perceived secretiveness.

Bernanke’s prepared remarks before taking questions were as academic as in the past, filled with caveats and asterisks. He cautioned that the Fed’s decision to keep interest rates at near zero assumes “no further shocks to the economy” and then repeated that current policy actions should be “taken with an eye to the likely future course of the economy.”

And he said that despite the recent surge in commodity prices that has driven up inflation, he expected it to drop in the medium term, saying the issue does not warrant any immediate action.

Bernanke called the federal deficit “the most important economic problem” facing the United States. Commenting on the Standard & Poor’s decision this month to downgrade the outlook for the United States from stable to negative, he said that “in one sense, the S&P’s action didn’t really tell us anything.”

“Everyone who reads the newspaper knows the United States has a long-term fiscal problem. That said, I hope this event will provide an incentive for Congress and the administration” to take action, he said.

Before the question-and-answer session, economists nibbled on lunch in the Fed’s cafeteria, down the hall from where Bernanke was to speak and where reporters sat in rows, tapping at laptops and speculating about the wood of the desk where Bernanke would sit. It is mahogany, according to a reliable source.

By completing its buying of Treasury bonds in June, the Fed is responding to rising inflation and the steady uptick in hiring.

“The economic recovery is proceeding at a moderate pace, and overall conditions in the labor market are improving gradually,” the Federal Open Market Committee said in its statement before the news conference.

In November the nation’s central bank announced that it would buy $600 billion in Treasury bonds to stimulate spending and loan-borrowing and push up stock prices. Fed officials have said the bond-buying helped strengthen the recovery and averted the risk of deflation, or falling prices. But members of Congress and others have raised concerns that the policy will increase the risk of inflation, which is considerably higher than it was last summer.

In its statement, the Fed also maintained its near-zero target for short-term interest rates, where it has been since December 2008, and indicated that it expects to keep rates “exceptionally low” for “an extended period.” Fed leaders signaled that they expect the economy to continue to expand, despite head winds from higher fuel costs and other sources. Although they acknowledged that higher prices for energy and other commodities “have pushed inflation up in recent months,” they said they expect the effects to be transitory. Still, they said, the board “will pay close attention to the evolution of inflation and inflation expectations.”

In announcing its latest economic forecast for 2011, the Fed projected the U.S. economy to grow 3.1 to 3.3 percent, lower than its January forecast of 3.4 to 3.9 percent. However, Fed leaders — the five serving Fed governors plus a dozen presidents of regional Fed banks across the country — forecast lower unemployment than in they did in January, expecting the jobless rate, 8.8 percent in March, to be in the 8.4 to 8.7 percent range in the final months of 2011. In January, they had projected joblessness to be in the 8.8 to 9 percent range in late 2011.

Fed officials expect overall inflation to be 2.1 to 2.8 percent this year, compared with expectations of 1.3 to 1.7 percent forecast in January.

Forecasters expect a Commerce Department report scheduled to be released on Thursday to show weak first-quarter growth in gross domestic product. They anticipate a 2 percent annual growth rate for the U.S. economy in the first three months of 2011, dragged down by higher fuel prices, winter weather and other factors.

In November the Fed announced what is known as its second round of quantitative easing, or QE2. It was an effort to lower long-term interest rates, strengthen economic growth and reduce joblessness. Those purchases, at a pace of $75 billion per month, will end June 30.