“The firm says robots on Tuesday detected radiation levels of up to 1,120 millisieverts per hour inside the No.1 reactor building.”

The NHK Japanese government propaganda tells us this in the last sentence of the article as if this is nothing!

These are the highest radiation levels there so far!

I am not an expert, but I say that if we do not get a miracle here right now, then we will most probably see another NUCLEAR EXPLOSION at reactor No. 1, after (MOX) reactor No. 3 exploded. 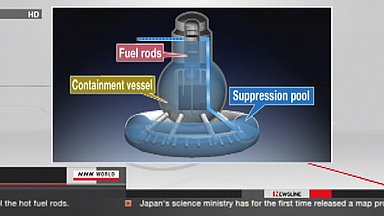 Tokyo Electric Power Company has begun testing one of the damaged reactors at the Fukushima Daiichi nuclear power plant to see if it can move forward with its plan to submerge and cool the hot fuel rods.

TEPCO began pumping more water into the No.1 reactor on Wednesday in order to monitor changes in the water depth in the containment vessel and check for leaks.

The test is part of a plan to fill the No.1 and No.3 reactors’ containment vessels with water by July, to cool the fuel rods in a stable manner.

TEPCO says it will raise the amount of water injected from 6 to 10 tons per hour for 6 hours, and then to 14 tons per hour. The temperature and pressure in the containment vessel will be monitored for 18 hours.

The utility says it will decrease the flow back to 6 tons per hour by Thursday morning and then send robots into the reactor building to check for leaks.

TEPCO also says it will make sure that the containment vessel, with the added weight of the water inside, can withstand strong aftershocks.

The firm says robots on Tuesday detected radiation levels of up to 1,120 millisieverts per hour inside the No.1 reactor building. It says some contaminated water may be leaking from the reactor into external pipes.