If the US were a corporation it would be history.

Soon we will witness the greatest financial collapse in world history.

– PIMCO’s Bill Gross Is Now Short US Debt, Hikes Cash To $73 Billion, An All Time Record 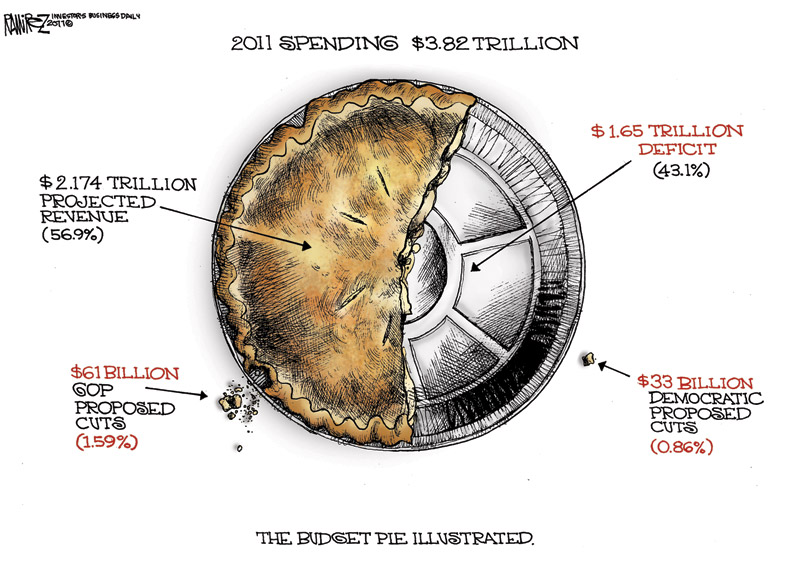 “The outlook reflects our view of the increased risk that the political negotiations over when and how to address both the medium- and long-term fiscal challenges will persist until at least after national elections in 2012,” said S&P credit analyst Nikola Swann.

The outlook means that there is a one-in-three likelihood that it could lower the long-term rating on the United States within two years, S&P said.

The move puts additional pressure on Congress to come up with a plan to bring down long-term deficits, which lawmakers from both political parities say are unsustainable.

President Obama unveiled a proposal last week to cut $4 trillion from the deficits over 12 years by enacting a mix of spending cuts and tax increases.

Republicans have proposed a competing plan to lower the long-term debt by $4.4 trillion over ten years, in part by shrinking Medicaid and Medicare.

“More than two years after the beginning of the recent crisis, U.S. policymakers have still not agreed on how to reverse recent fiscal deterioration or address longer-term fiscal pressures,” said Swann.

The Obama administration believes that lawmakers are making progress towards consensus on a long-term budget deal.

“We simply believe that the prospects are better,” said Jay Carney, the chief White House spokesman. “We think that the political process will outperform S&P expectations.”

Cantor said Republicans will not move forward on Obama’s request to raise the country’s debt ceiling unless “it is accompanied by serious reforms that immediately reduce federal spending and end the culture of debt in Washington.”

In a statement, a Treasury official stressed that S&P reaffirmed the nation’s pristine rating, adding that the agency assumes lawmakers will begin implementing a long-term debt plan by 2013.

“We believe S&P’s negative outlook underestimates the ability of America’s leaders to come together to address the difficult fiscal challenges facing the nation,” said Mary Miller, the Treasury’s assistant secretary for financial markets.

Miller argued that dealing with the current fiscal challenges is “well within our capacity as a country.” She noted that Obama has called on Congress to begin developing a deficit plan next month, with the aim of reaching a legislative framework by June.

“The U.S. economy is strengthening as it emerges from the recent recession,” said Miller. “Both political parties now agree that it is time to begin bringing down deficits as a share of GDP.”

In its report, S&P said its outlook change was based on the growth of the United States’ deficits over the last several years as a percentage of gross domestic product, the broadest measure of economic activity.

From 2003 to 2008, the nation’s general government debt varied between 2% and 5% of GDP, which is “noticeably larger” than other countries with “AAA” ratings, according to S&P.

In 2009, as the government increased spending to stimulate the economy, the U.S. debt load “ballooned” to more than 11% and has yet to come down, said S&P.

In a conference call with reporters, Swann compared the U.S. fiscal position to other AAA-rated countries, including the United Kingdom, Germany, France and Canada.

“The U.K. has already agreed on fiscal consolidation plan and began to implement it last year,” he said. “The U.S. has yet to agree on a plan.”

S&P cut its outlook for the United Kingdom to “negative” in 2009, before the British government’s austerity plan was unveiled last year. It has since been restored to “stable.”

Of the 127 sovereign nations that S&P monitors, only 19 have AAA ratings. The agency has never lowered its outlook for the United States, and the nation has never had a rating lower than AAA.

On Wall Street, investors reacted to the news by pushing share prices down sharply. The Dow Jones industrial average sank more than 200 points in the first half-hour of trading.

Standard & Poor’s is one of three major agencies that evaluate public and private debt issues. Their ratings are key to measuring an investor’s risk in buying the debt, an important factor in determining interest rates.

Moody’s, one of the other big ratings agencies, described the two deficit reduction plans currently on the table as “a significant shift in the U.S. fiscal debate.”

“This potential change in the direction of fiscal policy is credit positive for the U.S. federal government,” according to Moody’s Weekly Credit Outlook report. “Although it remains uncertain what sort of budget will actually be adopted.”