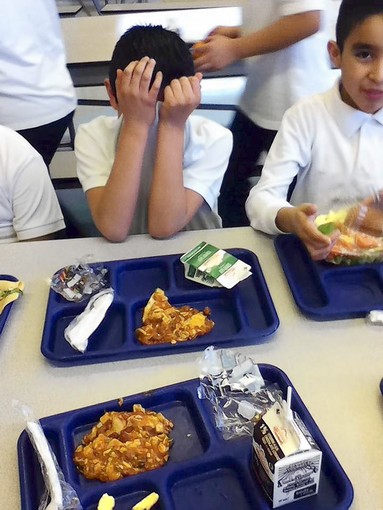 A Little Village Academy student cringes at an enchilada dish served at his school. Many students throw away their entrees uneaten and say they would rather bring food from home. The school, though, does not allow students to bring in their own lunches, unless they have a medical condition or a food allergy.

To encourage healthful eating, Chicago school doesn’t allow kids to bring lunches or certain snacks from home — and some parents, and many students, aren’t fans of the policy

Fernando Dominguez cut the figure of a young revolutionary leader during a recent lunch period at his elementary school.

“Who thinks the lunch is not good enough?” the seventh-grader shouted to his lunch mates in Spanish and English.

Fernando waved his hand over the crowd and asked a visiting reporter: “Do you see the situation?”

At his public school, Little Village Academy on Chicago’s West Side, students are not allowed to pack lunches from home. Unless they have a medical excuse, they must eat the food served in the cafeteria.

Principal Elsa Carmona said her intention is to protect students from their own unhealthful food choices.

“Nutrition wise, it is better for the children to eat at the school,” Carmona said. “It’s about the nutrition and the excellent quality food that they are able to serve (in the lunchroom). It’s milk versus a Coke. But with allergies and any medical issue, of course, we would make an exception.”

Carmona said she created the policy six years ago after watching students bring “bottles of soda and flaming hot chips” on field trips for their lunch. Although she would not name any other schools that employ such practices, she said it was fairly common.

A Chicago Public Schools spokeswoman said she could not say how many schools prohibit packed lunches and that decision is left to the judgment of the principals.

“While there is no formal policy, principals use common sense judgment based on their individual school environments,” Monique Bond wrote in an email. “In this case, this principal is encouraging the healthier choices and attempting to make an impact that extends beyond the classroom.”

Any school that bans homemade lunches also puts more money in the pockets of the district’s food provider, Chartwells-Thompson. The federal government pays the district for each free or reduced-price lunch taken, and the caterer receives a set fee from the district per lunch.

At Little Village, most students must take the meals served in the cafeteria or go hungry or both. During a recent visit to the school, dozens of students took the lunch but threw most of it in the garbage uneaten. Though CPS has improved the nutritional quality of its meals this year, it also has seen a drop-off in meal participation among students, many of whom say the food tastes bad.

“Some of the kids don’t like the food they give at our school for lunch or breakfast,” said Little Village parent Erica Martinez. “So it would be a good idea if they could bring their lunch so they could at least eat something.”

“(My grandson) is really picky about what he eats,” said Anna Torrez, who was picking up the boy from school. “I think they should be able to bring their lunch. Other schools let them. But at this school, they don’t.”

But parent Miguel Medina said he thinks the “no home lunch policy” is a good one. “The school food is very healthy,” he said, “and when they bring the food from home, there is no control over the food.”

At Claremont Academy Elementary School on the South Side, officials allow packed lunches but confiscate any snacks loaded with sugar or salt. (They often are returned after school.) Principal Rebecca Stinson said that though students may not like it, she has yet to hear a parent complain.

“The kids may have money or earn money and (buy junk food) without their parents’ knowledge,” Stinson said, adding that most parents expect that the school will look out for their children.

Such discussions over school lunches and healthy eating echo a larger national debate about the role government should play in individual food choices.

“This is such a fundamental infringement on parental responsibility,” said J. Justin Wilson, a senior researcher at the Washington-based Center for Consumer Freedom, which is partially funded by the food industry.

“Would the school balk if the parent wanted to prepare a healthier meal?” Wilson said. “This is the perfect illustration of how the government’s one-size-fits-all mandate on nutrition fails time and time again. Some parents may want to pack a gluten-free meal for a child, and others may have no problem with a child enjoying soda.”

For many CPS parents, the idea of forbidding home-packed lunches would be unthinkable. If their children do not qualify for free or reduced-price meals, such a policy would require them to pay $2.25 a day for food they don’t necessarily like.

“We don’t spend anywhere close to that on my son’s daily intake of a sandwich (lovingly cut into the shape of a Star Wars ship), Goldfish crackers and milk,” education policy professor Diane Whitmore Schanzenbach wrote in an email. Her son attends Nettelhorst Elementary School in Lakeview. “Not only would mandatory school lunches worsen the dietary quality of most kids’ lunches at Nettelhorst, but it would also cost more out of pocket to most parents! There is no chance the parents would stand for that.”

Many Little Village students claim that, given the opportunity, they would make sound choices.

“They’re afraid that we’ll all bring in greasy food instead of healthy food and it won’t be as good as what they give us at school,” said student Yesenia Gutierrez. “It’s really lame. If we could bring in our own lunches, everyone knows what they’d bring. For example, the vegetarians could bring in their own veggie food.”

“I would bring a sandwich or a Subway and maybe a juice,” said seventh-grader Ashley Valdez.

Second-grader Gerardo Ramos said, “I would bring a banana, orange and some grapes.”

“I would bring a juice and like a sandwich,” said fourth-grader Eric Sanchez.