“One can put out forest fires like this – by pouring water from far above,” said Gennady Pshakin, a Russian nuclear expert. “It is not clear where this water is falling. There is no control.”

Japanese authorities are considering a “Chernobyl solution” for the stricken nuclear power plant at Fukushima that would bury it in concrete and sand. 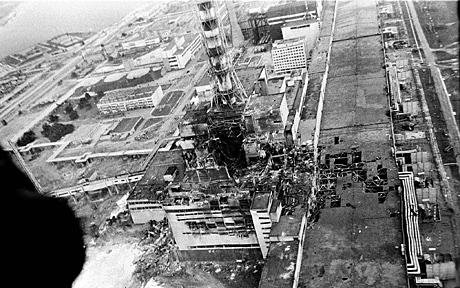 As the team of 300 workers continues to try to douse the reactors with water, engineers said they had not ruled out the drastic measure.

But the “messy fix” would be considered only as a last-ditch attempt as it would leave the plant and its surroundings off limits for decades.

“It is not impossible to encase the reactors in concrete, but our priority right now is to try to cool them down first,” a spokesman for Tokyo Electric Power, the plant’s owners, said.

At Chernobyl, authorities literally “threw everything” at the reactor to try to cool it down, including lead, boric acid and liquid nitrogen.

When they finally extinguished the fires, an army of workers conscripted by the then Soviet government buried the reactor in thousands of tons of sand, then threw together a concrete container known as the “sarcophagus”.

Despite costing hundreds of millions of pounds, the “sarcophagus” is already falling apart – and fears are growing that it is leaking radiation again.

Now they want to spend a further £600 million building an even bigger containment building, to put a lasting lid on the leak.

The situation at the Fukushima plant is likely to be even more complex and expensive because it involves not just one reactor but six.

Public awareness of the dangers of radioactivity is also higher and so it is likely to be harder to get willing workers to help with the construction.

“It’s just not that easy,” said Prof Murray Jennex, an expert at San Diego State University in California. “They [reactors] are kind of like a coffee maker. If you leave them on the heat, they boil dry and then they crack. Putting concrete on that wouldn’t help keep your coffee maker safe. But eventually, yes, you could build a concrete shield and be done with it.”

The cost and difficulty of a “Chernobyl solution” is increased by the need to reinforce the floors of the reactors.

At Chernobyl, mines had to be dug under the plant to inject a layer of concrete to stop the core melting into the ground. If this happened it would explode when it hit the water table.

The preferred option for Tokyo Electric Power would be to bring the reactors under control and then dismantle them. This would mean the damaged reactor cores would be put into cold storage and the plant mothballed. This is what happened after the Three Mile Island accident in Pennsylvania in 1979 and it is considered a cheaper and safer option.

It also means that there would be no need for an exclusion zone around the plant as there is at Chernobyl as the most dangerous radioactive material would be safely removed.

As Japan entered its second week after the earthquake and tsunami flattened coastal cities and killed thousands of people, the world’s worst nuclear crisis since Chernobyl looked far from over.

The nuclear disaster has triggered global alarm and reviews of safety at atomic power plants around the world.

“This is something that will take some time to work through, possibly weeks, as you eventually remove the majority of the heat from the reactors and then the spent-fuel pools,” Gregory Jaczko, the chairman of the US Nuclear Regulatory Commission, told a news conference at the White House.

Millions of people in Tokyo continued to work from home, some fearing a blast of radioactive material from the complex, 150 miles to the north, although the International Atomic Energy Agency said radiation levels in the capital were not harmful. That is little solace for about 300 nuclear plant workers toiling in the radioactive wreckage.

Even if engineers restore power at the plant, the pumps that cool the reactors with seawater may be too damaged from the earthquake, tsunami or subsequent explosions to work.

The first step is to restore electricity to pumps for reactors No 1 and No 2 by today. By tomorrow the government expected cooling pumps for the badly damaged reactors No 3 and No 4 to have power, said Hidehiko Nishiyama, Japan’s nuclear agency spokesman.

Some experts said dumping water from helicopters to try to cool spent fuel pools would have little impact.

“One can put out forest fires like this – by pouring water from far above,” said Gennady Pshakin, a Russian nuclear expert. “It is not clear where this water is falling. There is no control.”