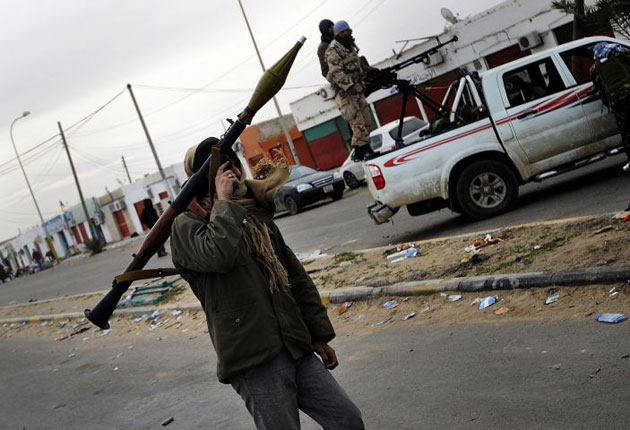 The sandstorm added to the terror and panic; one could hear the shrill sound of the shells and rockets coming in but had no idea where they would land until the shattering noise of the explosion and orange flames lit up the swirling dust.

All around the rebel fighters were in flight, with screeching tyres on trucks and cars, some piled on a mechanical digger, others running beside the vehicles desperate for a ride to safety. Anti-aircraft guns and rocket launchers had been abandoned. A few were on fire. Brega was lost, and the road to Benghazi lay wide open.

With the rebel forces in disarray and Muammar Gaddafi’s forces pressing ahead, only Western action would now save what was briefly “Free Libya”. And that, most of the opposition are convinced, is now a forlorn hope.

With their hold on Brega, which had followed the capture of Ras Lanuf, the regime now controls two key oil ports, putting them in a position to shut down power to the rebel-held east of the country. The two towns are also key points on the coastal route, putting Gaddafi’s forces within three hours’ drive of Benghazi, with just one other town, Azdabia, on the way. Taking Brega will also bring with it an airport, allowing the military to bring in reinforcements.

The exodus of rebel forces from Brega began on Saturday evening. It was complete by yesterday afternoon, with convoys of fighters outstripping the few residents trying to make a getaway along the road.

Some of the locals who stayed behind paid a terrible price. Dr Suleiman Refadi found four bodies lying on the road, a couple in their fifties, and two men in their early twenties. “They had been shot many times. They were civilians. Why were they murdered?” he asked. “The fighting should be limited to soldiers, not these innocent people.”

The soldiers were no longer in the mood to fight. Just a week ago these men were dreaming of a triumphant entry into Tripoli. Now they were a beaten army, fear and uncertainty replacing the bravado.

Yassin Mawafaq, a 22-year-old baker and revolutionary volunteer, had been posing with his Kalashnikov assault rifle for the cameras, firing off round after round into the air and vowing he would rather be a martyr than fail in his mission. Now the only thing on his mind was how to stay alive. Hunched in the back of a battered Toyota Corolla, he whispered: “A rocket landed near us. I saw a man with half his body blown off. We need to get away. We cannot stay here, we need to get away.”

Standing by the roadside, Ibrahim Husseini was still carrying his anti-tank missile launcher. He was tired and resigned. “I want to stay and fight, but the others are going. They have much better weapons than us, we could not match them. Too many people have been killed. We need to find out why it went wrong.”

Some of the questions could be addressed to the rebel leadership in Benghazi. On Saturday, General Abdel Fattah-Younis, a former regime interior minister whom William Hague had consulted before sending the mission which ended with British special forces soldiers being arrested, said there would be a counter-attack, which would rapidly reclaim lost ground. “Yes, the Gaddafi men control Ras Lanuf and the oil terminal, but this is only temporary. We shall recover them. We shall take back Ras Lanuf, at the latest by Sunday,” he said. “We have got a plan and we are carrying it out.”

On Saturday evening a group of shivering rebel fighters standing at a checkpoint in Brega got a fleeting visit from a commander in Benghazi. “Do not worry, we have 50 tanks now in Azdabia, they are coming up. We shall attack as soon as they arrive.”

Yesterday the same officer, who refused to give his name, was at the main gate of Azdabia, loudly claiming that Gaddafi forces were fighting among themselves in Misrata and some had switched sides to the rebels. These tales have been coming since the uprising began and many were by now openly sceptical.

“I do not think I believe any of this any longer,” said Khalid Bugaighis. “If all these soldiers are changing sides, then why are we in this position? No, it is finished here now. We need to go back to Benghazi and try and defend there. We can do street-fighting there. Maybe, in the meantime, [the international community] will bring in this no-fly zone. That will be our last chance.”

But in Benghazi Gaddafi loyalists who have been lying low have become emboldened and are now carrying out attacks. “I understand that there are problems in Benghazi,” said Mr Bugaighis. “But what choice have we got? That is the place of our last stand.”