Demonstrators who blocked roads into the main financial district were also said to have faced similar measures.

Today’s morning police operation was the largest effort to clear the protesters from Pearl Square in the capital, Manama, since the Shia demonstrations, inspired by the uprisings in Tunisia and Egypt, started in mid-February.

Amid concerns of a Shiite uprising in Bahrain, Saudi Arabia sent troops to support the Sunni monarchy. Bahrain’s opposition denounced the move as an ‘occupation.’ 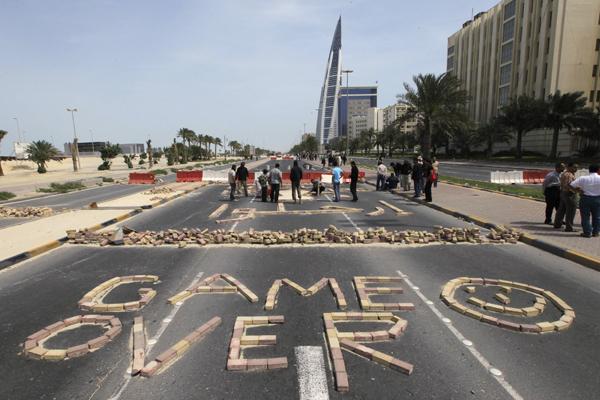 Anti-government protesters form the words “Game Over” with bricks as they block the roads from riot police at the junction of Bahrain Financial Harbor in Manama March 14. Bahrain has been gripped by its worst unrest since the 1990s after protesters took to the streets last month, inspired by uprisings that toppled the leaders of Egypt and Tunisia. (Hamad I Mohammed/Reuters)

Cairo — Saudi forces have reportedly arrived in Bahrain to reinforce its police, who clashed with protesters yesterday in an escalation of the month-long Shiite-led protests calling for democratic reform.

The Saudi forces are there on behalf of the Gulf Cooperation Council (GCC), the regional organization of which Bahrain and Saudi Arabia are both members. Their intervention underlines Saudi Arabia’s deep worry over the unrest on its border, but it’s likely only to harden the stance of the protesters, who have been unsatisfied by the government’s response to their demands.

The protest is led by Shiites, who make up about 70 percent of Bahrain’s population, which has been ruled by the Sunni Al Khalifa family since the late 1700s. The country’s Shiites complain of discrimination and have called for government reforms.

Opposition groups said Monday that the Saudi intervention was a declaration of war. Protests that began with calls for democratic reform and an end to Shiite discrimination are now calling for regime change.

“The entry of the Saudis does not mean these people are going to go back to their villages quietly,” says Toby Jones, a Gulf expert at Rutgers University. “It raises the stakes.”

Meanwhile, a pro-government parliamentary bloc on Monday called on the king to impose martial law after 100 people were reportedly wounded Sunday. Police attacked the mostly Shiite protesters who were blocking a highway leading to the financial district in the capital Manama. They used tear gas and rubber bullets against the demonstrators, but were unable to disperse them.

Bahrain is home to the US Navy’s Fifth Fleet, and Secretary of Defense Robert Gates was in the country Saturday, urging the government to move more quickly toward reform. The White House released a statement criticizing the violence Sunday. “We urge the government of Bahrain to pursue a peaceful and meaningful dialogue with the opposition rather than resorting to the use of force,” the statement said.

But Dr. Jones says the entry of Saudi military forces will make the situation stickier for the US, which will find it more difficult to publicly criticize its key ally.

Saudi Arabia has moved quickly to quell stirrings of protest within its own kingdom in recent weeks. It’s unclear whether Bahrain actually asked for assistance, or whether it was imposed by its larger neighbor, says Jones. “It could very well be that Riyadh made a phone call and said ‘we’re coming,’” he says.

Either way, the foreign forces are not welcomed by protesters, who reportedly called it an “occupation” and continued to block streets in the capital Monday.

The renewed call for dialogue by Crown Prince Salman bin Hamad al-Khalifa Sunday night, in which he offered to discuss increasing the power of the parliament, is too little, too late, says Jones. The openness of the opposition to discuss reform with the government “is very quickly evaporating,” he says. “People are not going to be satisfied unless something more substantial happens.”