The damage control to the Fukushima explosion reported earlier is coming fast and furious. According to CNN, “the explosion at an earthquake-damaged nuclear plant was not caused by damage to the nuclear reactor but by a pumping system that failed as crews tried to bring the reactor’s temperature down, Chief Cabinet Secretary Yukio Edano said Saturday. The next step for workers at the Fukushima Daiichi plant will be to flood the reactor containment structure with sea water to bring the reactor’s temperature down to safe levels, he said. The effort is expected to take two days.” While the government is trying to play down the threat from the explosion, it has nonetheless double the evacuation zone radius from 10 to 20 kilometers: “Radiation levels have fallen since the explosion and there is no immediate danger, Edano said. But authorities were nevertheless expanding the evacuation to include a radius of 20 kilometers (about 12.5 miles) around the plant. The evacuation previously reached out to 10 kilometers.” Next steps are to flood the reactor with salt water. NHK reports: “The TEPCO Fukushima Daiichi nuclear power plant in Fukushima Prefecture is believed to be exploded, and in order to prevent corruption, the containment vessel will be filled with sea water to cool containers and vehicles used by the SDF pump I. According to the Ministry of Defense, work will begin at 8:00 pm, and that it expected to end around 1:00 am on March 13 (or roughly 11 am Eastern).” And while containment efforts peak, the radiation level is reported to be in the range of 1015 microsieverts / hr. In the meantime, confusion in Japan is pervasive as up to a million people are without power. And while we hope the outcome of the Fukushima situation will be prompt and favorable, the economic devastation to the country will be pervasive for weeks to come.

A before and after picture, showing the loss of Reactor 1 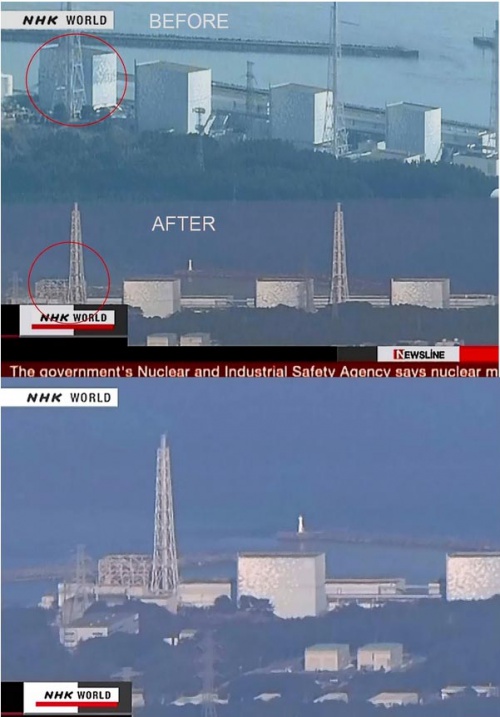 There has been an explosion at a Japanese nuclear power plant that was hit by Friday’s devastating earthquake.

Pictures show a blast at the Fukushima plant and initial reports say several workers were injured.

Nuclear expert, Malcolm Grimston told the BBC that nuclear materials may have been able to escape .

And as predicted by Zero Hedge first yesterday, the power plant has just announced that there is indeed a meltdown at the plant.

The core at Fukushima No. 1 nuclear power plant’s No. 1 reactor may be partially melting, the nuclear safety agency said Saturday.

Radioactive substance cesium was detected around the reactor, it said.

Alas, as many may be affected by fallout, we present the wind data for Asia for Saturday: 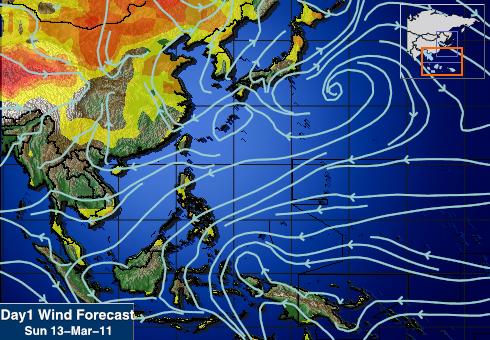