The idea is to destroy the pensions in the coming greatest financial collapse in history.

Why would a pension fund not invest at least 10% in gold and silver?

The Driver for Gold You’re Not Watching 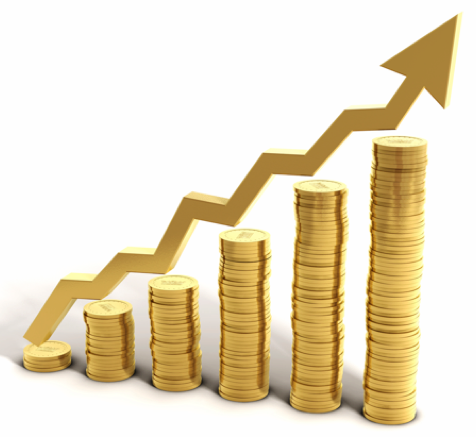 You already know the basic reasons for owning gold – currency protection, inflation hedge, store of value, calamity insurance – many of which are becoming clichés even in mainstream articles. Throw in the supply and demand imbalance, and you’ve got the basic arguments for why one should hold gold for the foreseeable future.

All of these factors remain very bullish, in spite of gold’s 450% rise over the past 10 years. No, it’s not too late to buy, especially if you don’t own a meaningful amount; and yes, I’m convinced the price is headed much higher, regardless of the corrections we’ll inevitably see. Each of the aforementioned catalysts will force gold’s price higher and higher in the years ahead, especially the currency issues.

But there’s another driver of the price that escapes many gold watchers and certainly the mainstream media. And I’m convinced that once this sleeping giant wakes, it could ignite the gold market like nothing we’ve ever seen.

The fund management industry handles the bulk of the world’s wealth. These institutions include insurance companies, hedge funds, mutual funds, sovereign wealth funds, etc. But the elephant in the room is pension funds. These are institutions that provide retirement income, both public and private.

We know a few hedge fund managers have invested in gold, like John Paulson, David Einhorn, Jean-Marie Eveillard. There are close to twenty mutual funds devoted to gold and precious metals. Lots of gold and silver bugs have been buying.

So, what about pension funds? 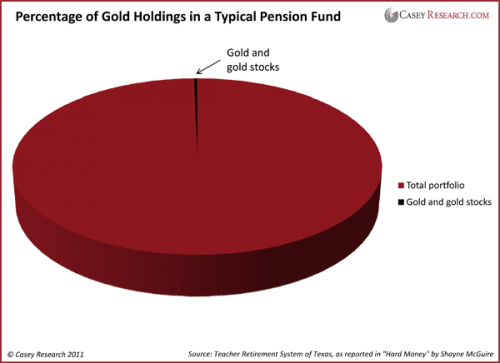 According to estimates by Shayne McGuire in his new book, Hard Money; Taking Gold to a Higher Investment Level, the typical pension fund holds about 0.15% of its assets in gold. He estimates another 0.15% is devoted to gold mining stocks, giving us a total of 0.30% – that is, less than one third of one percent of assets committed to the gold sector.

Shayne is head of global research at the Teacher Retirement System of Texas. He bases his estimate on the fact that commodities represent about 3% of the total assets in the average pension fund. And of that 3%, about 5% is devoted to gold. It is, by any account, a negligible portion of a fund’s asset allocation.

Now here’s the fun part. Let’s say fund managers as a group realize that bonds, equities, and real estate have become poor or risky investments and so decide to increase their allocation to the gold market. If they doubled their exposure to gold and gold stocks – which would still represent only 0.6% of their total assets – it would amount to $93.3 billion in new purchases.

How much is that? The assets of GLD total $55.2 billion, so this amount of money is 1.7 times bigger than the largest gold ETF. SLV, the largest silver ETF, has net assets of $9.3 billion, a mere one-tenth of that extra allocation.

The market cap of the entire sector of gold stocks (producers only) is about $234 billion. The gold industry would see a 40% increase in new money to the sector. Its market cap would double if pension institutions allocated just 1.2% of their assets to it.

But what if currency issues spiral out of control? What if bonds wither and die? What if real estate takes ten years to recover? What if inflation becomes a rabid dog like it has every other time in history when governments have diluted their currency to this degree? If these funds allocate just 5% of their assets to gold – which would amount to $1.5 trillion – it would overwhelm the system and rocket prices skyward.

And let’s not forget that this is only one class of institution. Insurance companies have about $18.7 trillion in assets. Hedge funds manage approximately $1.7 trillion. Sovereign wealth funds control $3.8 trillion. Then there are mutual funds, ETFs, private equity funds, and private wealth funds. Throw in millions of retail investors like you and me and Joe Sixpack and Jiao Sixpack, and we’re looking in the rear view mirror at $100 trillion.

I don’t know if pension funds will devote that much money to this sector or not. What I do know is that sovereign debt risks are far from over, the U.S. dollar and other currencies will lose considerably more value against gold, interest rates will most certainly rise in the years ahead, and inflation is just getting started. These forces are in place and building, and if there’s a paradigm shift in how these managers view gold, look out!

I thought of titling this piece, “Why $5,000 Gold May Be Too Low.” Because once fund managers enter the gold market in mass, this tiny sector will light on fire with blazing speed.

My advice is to not just hope you can jump in once these drivers hit the gas, but to claim your seat during the relative calm of this month’s level prices.