Silvio Berlusconi helped Col Muammar Gaddafi to gain the leadership of the African Union in 2009 with the help of two escort women. 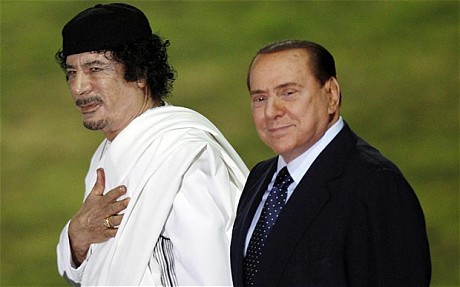 Opponents have criticised Berlusconi for failing to condemn violence in Libya and saying he did not want to ‘disturb’ Gaddafi during the revolt Photo: REUTERS

Italy’s prime minister has himself been involved in several sex scandals and is said to have arranged the sending of the escorts to an opponent of Mr Gaddafi’s as a favour to the Libyan leader.

Col Gaddafi was the surprise choice as leader of the 53-nation African Union in February 2009 much to the unease of countries such as Tanzania and Nigeria.

Details of how the escorts were provided were revealed by Nuri Al Mismari, a former close aide of Col Gaddafi’s, in an interview with Arab newspaper Ashaeq Al-Awsat in Paris.

Mr Al Mismari was Gaddafi’s diplomatic chief for 35 years before he left Libya last year and went into exile in Paris.

He told the Arab newspaper that an unidentified African leader was opposing the election of Col Gaddafi but the situation was “resolved with an unorthodox solution.”

He said: “Berlusconi helped resolve the situation and secure Gaddafi’s position by sending in two beautiful escorts to the leader of the African nation in question. This had the desired affect. The leader was convinced and he gave his vote to Gaddafi – and from here is born the expression ‘bunga bunga’ which indicates salacious, adventurous women.”

Mr Al Mismari said he was “ashamed” to have worked for the regime, but said Western leaders should also shoulder some of the blame for treating Col Gaddafi as they did.

Col Gaddafi has visited Italy twice in the last two years and was greeted with a huge fanfare.