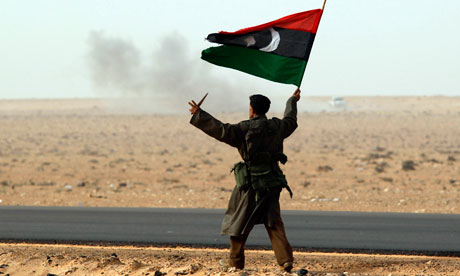 Britain is to send experts able to give military advice into east Libya to make contact with opposition leaders, as the struggle for control escalates.

The move is a clear intervention on the ground to bolster the anti-Gaddafi uprising, learn more about its leadership, and see what logistical support it needs. Whitehall sources said the diplomatic taskforce would not give arms to the rebels, as there is an international arms embargo.

It came as Libya’s deputy foreign minister, Khaled Kaim, said that Tripoli had accepted a peace initiative put forward by Venezuela’s president Hugo Chávez, which was heavily criticised by the White House. Kaim said it stated that a committee would be formed by African, Asian and Latin American countries “to help the international dialogue and to help the restoration of peace and stability”.

Interpol issued a global alert against Muammar Gaddafi and 15 other Libyans, including his daughter and seven sons, in an effort to enforce sanctions.

David Cameron has been determined to back the resistance, partly because, following advice this week by experts and Libyans in the UK, he believes it is neither simply tribal nor Islamist, but built round democratic demands that could, in the medium term, mark a decline in the Middle East’s anti-western mood. The foreign secretary, William Hague, has been in telephone contact with General Abdul Fattah Younis Obaidi, the former interior minister, now based in Benghazi, seen as a likely successor to Gaddafi. He was placed in charge of military defences in the city in a sign he is at the helm of the opposition.

British officials know the identity of all the members of the broad-based Benghazi committee focused on keeping essential services and defences going.

As the situation regarding international involvement developed rapidly , Nato commanders were instructed to draw up plans for military options, including a no-fly zone. Cameron had earlier faced criticism, including from the Pentagon, for raising the idea of a Nato no-fly zone.

The UK government believes the national council in Benghazi is focused on keeping essential services running, but where it can is “now thinking about how they can take the struggle forward to other parts of the country. They are not yet calling themselves a government in waiting, and we have not yet seen a coherent programme,” one source said. The UK taskforce is to assess humanitarian need and keep the opposition leaders in the east better informed about diplomatic activity. The national council is focused most on what it can do to help the isolated rebel towns close to Tripoli.

British diplomats quit Libya last week as fighting escalated. They remain unable to access the largely pro-Gaddafi west of Libya, from which all aid agencies, including the Red Cross, have been barred.

Meanwhile the international development minister Alan Duncan warned the price of crude oil could hit $250 a barrel due to the unrest in the Middle East. That would send the UK price of a litre of petrol to more than £2, he tells the Times.

Ambassadors representing the 28 Nato countries instructed military commanders to plan for what an alliance spokesperson described as “all eventualities”. However, the spokesman said no “operational steps” had been taken and the UN security council had not authorised the use of force.

Anders Fogh Rasmussen, Nato’s secretary general, has made it clear that, in his view, a no-fly zone would require a specific UN resolution. The decision to draw up contingency plans was not officially announced, because of the sensitivity surrounding an issue on which the alliance is far from united.

The decision to task Nato commanders with contingency planning was taken despite serious reservations expressed by Robert Gates, shared by British military chiefs. “Let’s just call a spade a spade. A no-fly zone begins with an attack on Libya to destroy the air defences … and then you can fly planes around the country and not worry about our guys being shot down,” Gates said earlier this week. However, President Barak Obama subsequently said he was placing US military assets near Libya to ensure he had the “full capacity to act” if the situation deteriorated further.

But the government has placed on alert air, sea and ground forces that could quickly intervene in the conflict if ordered to do so.

Typhoon jets would be deployed to RAF Akrotiri in one of the two sovereign base areas in Cyprus, while 3rd Battalion The Royal Regiment of Scotland – the Black Watch – is on 24 hours’ notice to help in evacuation and humanitarian operations, defence officials said.

An RAF airborne radar and early warning aircraft is based in Malta where the MoD has also set up a forward joint task force headquarters. Officials declined to say what intelligence they had gathered on the quality and number of pro-Gaddafi aircraft and armour.

Meanwhile, a ship understood to contain £100m worth of Libyan dinars has been seized and escorted into Harwich docks in Essex by the UK Border Agency boat Vigilant, the Home Office said. It returned after failing to dock at Tripoli. She was tracked by British authorities and intercepted off the coast. The chancellor, George Osborne, froze Gaddafi’s £900m of UK-based assets last Sunday.

1 thought on “Libya: Rebel Fighters Being Coached By UK Military”