US Corn Belt Braces for Major Flooding in Spring 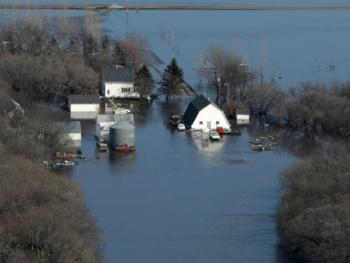 After a nasty winter in which winter storms blanketed large portions of the U.S., the great thaw is now threatening one of the key corn producing regions of the country.

The Dakotas, Minnesota, and Iowa are all under threat.

Accumulated precipitation this winter through the end of February, from northern Iowa into the southern two-thirds of Minnesota and westward to the Dakotas, ranged from 125 percent of normal to well over 200 percent, meteorologists say.

That raises the risk of major flooding, especially in the big corn, spring wheat and soybean areas of North Dakota’s Red River Valley and the upper Mississippi River region

Illinois and Iowa alone produce almost a third of corn and soybeans in the United States, the world’s leading exporter of those industrial crops. North Dakota and Minnesota produce more than half of U.S. spring wheat and durum, the highest protein wheats.

While U.S. crops in the north are under threat of floods, down further south, it’s droughts that have damaged production.