China is training 10,000 messenger pigeons to deliver vital military communications in the event of the country’s communication systems breaking down. 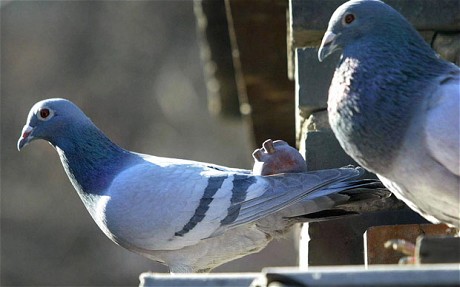 China has had a division of military homing pigeons since 1950 Photo: AFP/GETTY IMAGES

According to the Chinese state media, the pigeons are being trained by a special unit of the People’s Liberation Army in the central city of Chengdu.

“They will be primarily called upon to conduct special military missions between troops stationed at our borders,” said Chen Hong, an air force expert, to China Central Television (CCTV), the state broadcaster.

“In modern warfare, the pigeon is indispensable,” he added. “There are as many military pigeons as there are soldiers in the Swiss army, for example.” Chen Chuntao, the officer responsible for the pigeon “army” said the birds were the “most practical and effective short and medium distance tool for communications if there is electromagnetic interference or a collapse in our signals”.

A central city was chosen because homing pigeons return to base after each mission.

China has had a division of military homing pigeons since 1950, but the current unit only numbers a few hundred birds and has been primarily used for corresponding with Chinese bases on islands in the South China Sea.

The core of the unit are the successors of hundreds of messenger pigeons brought to China in 1937 by Lieutenant Claire Lee Chennault, a retired United States Airforce pilot, who was sent to help repel the Japanese invasion of the mainland.