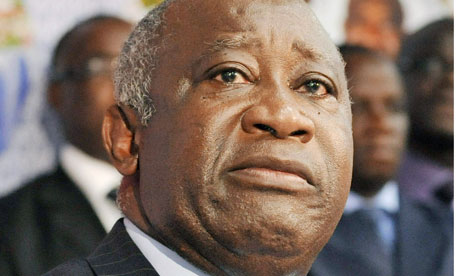 Ivory Coast’s Laurent Gbagbo, who refuses to cede the presidency to Alassane Ouattara, has also launched a crackdown on press loyal to his rival. Photograph: Sia Kambou/AFP/Getty Images

The Ivory Coast president, Laurent Gbagbo, has cut off electricity and water supplies to millions of people in the north of the country “for political reasons”, the UN has said.

The national power company reported that armed men entered its buildings on Monday night and ordered the shutdown, the latest step in an increasingly violent move towards civil war.

“The statement of the electricity company (says) this energy shortage is not due to technical issues,” a UN official, Ndolamb Ngokwey, told the BBC. “They clearly said it has to do with the political situation, so it was cut for political reasons.”

A war eight years ago divided the country into a rebel-controlled north and a loyalist south. Issia Doumbia, a spokesman for the New Forces rebels, who control the north and are loyal to Gbagbo’s rival Alassane Ouattara, told the Associated Press: “Millions of people across the north are without water or electricity. During the entire war, Gbagbo never cut the people off. But now, things are turning bad fast.”

The rebels have operated a de facto government since 2002. Services have continued to function but the rebels have been widely accused of corruption.

Meanwhile, the UN has apologised to Belarus for falsely alleging it broke an arms embargo against Ivory Coast. The office of the secretary general, Ban Ki-moon, had reported on Sunday that, in “a serious violation” of UN sanctions, Belarus supplied three attack helicopters to Gbagbo’s military forces.

But Alain le Roy, the UN’s peacekeeping chief, said he apologised to the government of Belarus on behalf of the UN for the erroneous report, which he called a “very bad incident for us”.

Le Roy said the initial information about the helicopter deliveries from Belarus came from the independent experts who are monitoring sanctions. They receive intelligence from many sources. But he said: “UNOCI should not have reported that a plane has landed when it was clearly not true.”

The report was issued after a week of intensified street fighting in the main city of Abidjan between forces loyal to Gbagbo and Ouattara, the widely acknowledged election winner, that left dozens dead.

The clashes led to a UN warning that the country was closer to the brink of reigniting civil war, a view backed by Le Roy.

Last week the UN said more than 300 people had died since the country’s disputed November election, but that total does not include casualties from the most intense fighting, which could exceed 100. The UN refugee body estimates that 20,000 people fled the fighting in a single day last week, with the total now at about 130,000.

International radio stations, including the BBC, have been taken off air in what appears to be a renewed clampdown on foreign media.

Gbagbo’s government has been cracking down on press loyal to Ouattara. Nine pro-Ouattara newspapers suspended publication on Tuesday after one of them was banned and three were fined for their coverage of police brutality last week.

Mohamed Keita, of the Committee to Protect Journalists, said: “It is becoming unbearably dangerous for media outlets and their journalists to operate in Ivory Coast as both Gbagbo and Ouattara camps exact reprisals on their critics in the press.

“We call on both sides to refrain from targeting the press or using politically motivated censorship.”

Two reporters from the north have been detained by pro-Gbagbo security forces in Abidjan since late January.