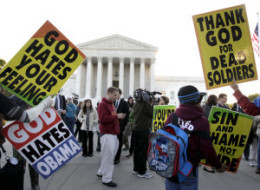 If there is a hell – and there isn’t – then these people are already in hell, right here and now.

If your children died and you have to face such idiots, do not allow yourself to get insulted by them, because that is exactly what they want.

“Always forgive your enemies – nothing annoys them so much.”
– Oscar Wilde

And then stop seeing them as enemies, but as the ignorant and divine fools that they are.

And then you should tell other parents to get their ‘children’ out of the army if they can, because this is the mindset of the elite puppets that they are fighting for:

(Soldiers are) dumb, stupid animals to be used as pawns for foreign policy.
(as quoted in Woodward and Bernstein’s “The Final Days”, ch. 14)
– Henry Kissinger

Yes, even Henry (Heinz) Kissinger is only an elite puppet.

And knowing the truth, that your children are seen as cannon fodder by the elitists and died fighting in illegal wars, is even more painful then to face some ignorant fools:

Your children died for the money, power and control agenda of elite criminals and that is extremely painful. 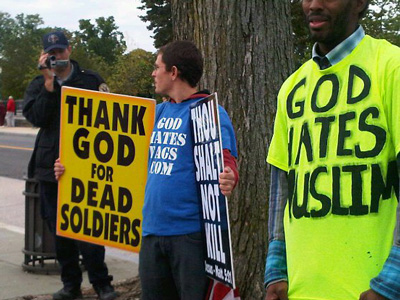 WASHINGTON — The Supreme Court ruled Wednesday that a grieving father’s pain over mocking protests at his Marine son’s funeral must yield to First Amendment protections for free speech. All but one justice sided with a fundamentalist church that has stirred outrage with raucous demonstrations contending God is punishing the military for the nation’s tolerance of homosexuality.

The 8-1 decision in favor of the Westboro Baptist Church of Topeka, Kan., was the latest in a line of court rulings that, as Chief Justice John Roberts said in his opinion for the court, protects “even hurtful speech on public issues to ensure that we do not stifle public debate.”

The decision ended a lawsuit by Albert Snyder, who sued church members for the emotional pain they caused by showing up at his son Matthew’s funeral. As they have at hundreds of other funerals, the Westboro members held signs with provocative messages, including “Thank God for dead soldiers,” `’You’re Going to Hell,” `’God Hates the USA/Thank God for 9/11,” and one that combined the U.S. Marine Corps motto, Semper Fi, with a slur against gay men.

Justice Samuel Alito, the lone dissenter, said Snyder wanted only to “bury his son in peace.” Instead, Alito said, the protesters “brutally attacked” Matthew Snyder to attract public attention. “Our profound national commitment to free and open debate is not a license for the vicious verbal assault that occurred in this case,” he said.

The ruling, though, was in line with many earlier court decisions that said the First Amendment exists to protect robust debate on public issues and free expression, no matter how distasteful. A year ago, the justices struck down a federal ban on videos that show graphic violence against animals. In 1988, the court unanimously overturned a verdict for the Rev. Jerry Falwell in his libel lawsuit against Hustler magazine founder Larry Flynt over a raunchy parody ad.

What might have made this case different was that the Snyders are not celebrities or public officials but private citizens. Both Roberts and Alito agreed that the Snyders were the innocent victims of the long-running campaign by the church’s pastor, the Rev. Fred Phelps, and his family members who make up most of the Westboro Baptist Church. Roberts said there was no doubt the protesters added to Albert Snyder’s “already incalculable grief.”

But Roberts said the frequency of the protests – and the church’s practice of demonstrating against Catholics, Jews and many other groups – is an indication that Phelps and his flock were not mounting a personal attack against Snyder but expressing deeply held views on public topics.

Indeed, Matthew Snyder was not gay. But “Westboro believes that God is killing American soldiers as punishment for the nation’s sinful policies,” Roberts said.

“Speech is powerful. It can stir people to action, move them to tears of both joy and sorrow, and – as it did here – inflict great pain. On the facts before us, we cannot react to that pain by punishing the speaker,” Roberts said.

Snyder’s reaction, at a news conference in York, Pa.: “My first thought was, eight justices don’t have the common sense God gave a goat.” He added, “We found out today we can no longer bury our dead in this country with dignity.”

He said it was possible he would have to pay the Phelpses around $100,000, which they are seeking in legal fees, since he lost the lawsuit. The money would, in effect, finance more of the same activity he fought against, Snyder said.

Margie Phelps, a daughter of the minister and a lawyer who argued the case at the Supreme Court, said she expected the outcome. “The only surprise is that Justice Alito did not feel compelled to follow his oath,” Phelps said. “We read the law. We follow the law. The only way for a different ruling is to shred the First Amendment.”

She also offered her church’s view of the decision. “I think it’s pretty self-explanatory, but here’s the core point: the wrath of God is pouring onto this land. Rather than trying to shut us up, use your platforms to tell this nation to mourn for your sins.”

Veterans groups reacted to the ruling with dismay. Veterans of Foreign Wars national commander Richard L. Eubank said, “The Westboro Baptist Church may think they have won, but the VFW will continue to support community efforts to ensure no one hears their voice, because the right to free speech does not trump a family’s right to mourn in private.”

The picketers obeyed police instructions and stood about 1,000 feet from the Catholic church in Westminster, Md., where the funeral took place in March of 2006.

The protesters drew counter-demonstrators, as well as media coverage and a heavy police presence to maintain order. The result was a spectacle that led to altering the route of the funeral procession.

Several weeks later, Albert Snyder was surfing the Internet for tributes to his son from other soldiers and strangers when he came upon a poem on the church’s website that assailed Matthew’s parents for the way they brought up their son.

Soon after, Snyder filed a lawsuit accusing the Phelpses of intentionally inflicting emotional distress. He won $11 million at trial, later reduced by a judge to $5 million.

The federal appeals court in Richmond, Va., threw out the verdict and said the Constitution shielded the church members from liability. The Supreme Court agreed.

Forty-eight states, 42 U.S. senators and veterans groups had sided with Snyder, asking the court to shield funerals from the Phelps family’s “psychological terrorism.”

While distancing themselves from the church’s message, media organizations, including The Associated Press, urged the court to side with the Phelps family because of concerns that a victory for Snyder could erode speech rights.

Roberts described the court’s holding as narrow, and in a separate opinion Justice Stephen Breyer suggested that in other circumstances governments would not be “powerless to provide private individuals with necessary protection.”

But in this case, Breyer said, it would be wrong to “punish Westboro for seeking to communicate its views on matters of public concern.”