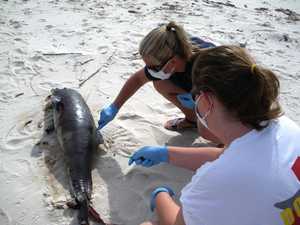 IMMS Photo Rebecca Winstead and Megan Broadway with the Institute of Marine Mammal Studies in Gulfport respond to the beaching of a dolphin calf. More baby dolphins were found over the weekend and today.

GULFPORT — The phenomenon of new born or stillborn baby dolphins washing ashore from the Gulf or the Mississippi Sound continued through the weekend and today.

The total in Mississippi and Alabama alone is 36 calves and eight adults or young adults, as of mid-day today.

The number is higher, if you include all four of the northern Gulf states effected by the BP oil spill. But researchers in Mississippi and Alabama that are concerned about the sharp spike in the number of dead newborns along the coasts of the two states before the birthing season for dolphins gets fully under way.

On Saturday, one calf was confirmed dead on Cat Island. On Sunday, calves were found on West Point Island near Dauphin Island, near a river in Mobile Bay and on the beach in Gulfport. Today, there was one in Gulfport and one in Pass Christian.

“They are really small,” said Megan Broadway, a research assistant with the Institute for Marine Mammal Studies in Gulfport. “They are newborns. We don’t know if they lived at all or how many hours or days they might have lived.”

Read more about the dolphin deaths in the print edition of the Sun Herald.