Here is what happens if you didn’t bail out the banksters: 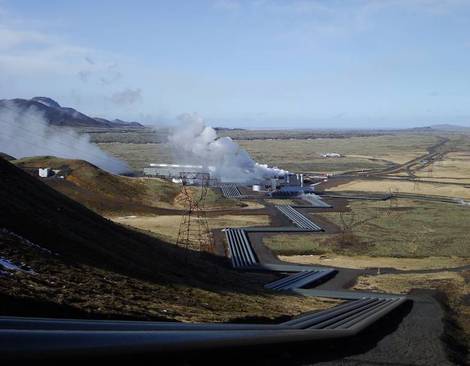 A pipeline sits at the Hellisheidi geothermal energy plant, operated by Orkuveita Reykjavikur, near Hengill volcano, in Hengill, Iceland.

Feb. 28 (Bloomberg) — Europeans left stranded at airports last year as an Icelandic volcano spewed ash across the continent may soon benefit from the power that seethes beneath the remote north Atlantic island.

Iceland is doing a feasibility study into building a 1,170- kilometer (727-mile) power cable to Scotland to send some of its untapped potential 18 terawatt-hours of geothermal and hydropower — that’s enough for 5 million European homes. The project has the full backing of the government, Industry Minister Katrin Juliusdottir said in an interview.

“Icelanders live with earthquakes and volcanic activity but the benefits are that now we can monetize these powers,” said Valdimar Armann, an economist at Reykjavik-based asset manager GAMMA, who estimates annual clean-energy exports could reach about a tenth of the island’s $12 billion economy.

The island is trying to emerge from Europe’s biggest banking meltdown this century to restyle itself as one of the European Union’s main sources of renewable energy. The power cable, which would be the longest of its kind ever built, would come as the EU strives to reach its target of 20 percent clean energy by 2020. In about 20 years, Iceland’s energy revenue per capita may rival that in Norway, where oil income has made its $540 billion sovereign wealth fund the world’s second-biggest, Armann said.

The U.K. day-ahead spot price values 18 terawatt hours at 828 million pounds ($1.33 billion), according to data available on Bloomberg. Landsvirkjun, a state-owned utility that produces 75 percent of Iceland’s electricity, is driving the feasibility study for the $2.1 billion power-cable project.

Investors are already more upbeat about Iceland’s prospects of recovery. The cost of insuring against an Icelandic default fell below Spain’s on Feb. 11, credit default swaps show. The island, the world’s fifth-richest per capita in 2007, still has a long way to go before it can restore its former wealth. Its 2008 banking crisis sent the krona down 80 percent against the euro offshore and shaved almost a fifth off disposable incomes the following year.

Iceland may also be unable to realize its geothermal dreams without some foreign investment. It costs $300 million to $400 million to generate each terawatt hour, according to Ragna Sara Jonsdottir, a spokeswoman at Landsvirkjun.

The government estimates that 75 percent of Iceland’s potential energy is undeveloped. Hydropower, fueled by the island’s glaciers, accounts for about 73 percent of electricity production, with geothermal generating about 27 percent. About 39 percent of the available geothermal energy, which taps the earth’s heat, is used to make electricity.
Mission for Iceland

President Olafur Ragnar Grimsson has been travelling the world promoting Icelandic expertise in geothermal technology and has announced deals with China, India and Russia. He says countries are turning to Iceland for clues on how to switch to green energy.

“The geothermal transformation of the world has become a very important global mission for Iceland,” he said in an interview on Jan. 28 in Davos, Switzerland. “We’ve proved that you can move within a relatively short time from a fossil-fuel economy over to a clean economy.”

The island produced 17.2 terawatt-hours of electricity last year, just shy of the 18 terawatt-hours it could send to the EU every year if the cable is built. Of that, about 80 percent went to three aluminum smelters and a ferrosilicon smelter. Output could double or triple over the next 30 years, depending on whether Iceland exploits environmentally sensitive areas, Landsvirkjun estimates.

State-owned Orkuveita Reykjavikur hf is Iceland’s second- largest utility, followed by HS Orka hf, which was taken over by Canada’s Magma Energy Corp. last year. Energy accounted for about 5 percent of the economy in 2008, compared with almost 7 percent for financial services, according to the latest data available from the country’s statistics agency.

Iceland’s drive to become one of Europe’s main renewable energy sources comes as competition also intensifies in Denmark and Norway to supply the continent with energy. The EU is trying to spur development of a power grid covering the whole region to establish more links between countries, connect offshore turbines to prevent blackouts when the wind doesn’t blow and allow easier movement of power between markets.

So far, the island’s producers have concentrated on selling power to the energy-intensive aluminum industry. Iceland now wants to diversify to other industries that use a lot of power, such as data centers and chemical industries, said Juliusdottir.

Alcoa Inc., Rio Tinto Group and Century Aluminum Company have already set up plants in Iceland to take advantage of its cheap energy.

For now, demand for access to Iceland’s power is growing faster than the island can supply. Alcoa, the biggest U.S. aluminum producer, said this month it’s pursuing a plan to build a geothermal-powered smelter even after Landsvirkjun said it may not be able to supply the plant.

“We have to consider options that allow us to generate the greatest amount of revenue,” said Juliusdottir. “Connecting Iceland with Europe via cable gives us the chance to sell our excess power onto the spot market in Europe.”