How many times have I said that the elitists want to turn the US into a Third-World country?

Far too many times …

… and I know that I am probably boring many of you, but I am repeating myself all of the time because there are so many new readers that only now woke up from their slumber. 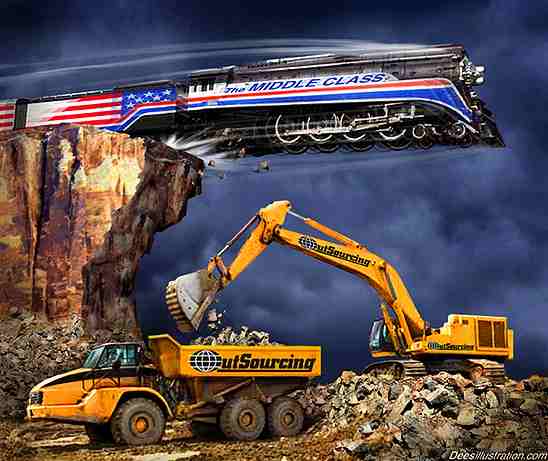 From now on, whenever you hear the term “the global economy” you should immediately equate it with the destruction of the U.S. middle class.  Over the past several decades, the American economy has been slowly but surely merged into the emerging one world economic system.  Unfortunately for the middle class, much of the rest of the world does not have the same minimum wage laws and worker protections that we do.  Therefore, the massive global corporations that now dominate our economy are able to pay workers in other countries slave labor wages and import the products that they make into the United States to compete with products made by “expensive” American workers.  This has resulted in a mass exodus of manufacturing facilities and jobs from the United States.

But without good, high paying jobs the U.S. middle class cannot continue to be the U.S middle class.  The only thing that the vast majority of Americans have to offer in the economic marketplace is their labor.  Sadly, that labor has now been dramatically devalued.  American workers now must directly compete for jobs with millions upon millions of workers on the other side of the world that toil away for 15 hours a day at slave labor wages.  This is causing jobs to leave the United States at an almost unbelievable rate, and it is putting tremendous downward pressure on the wages of millions of jobs that are still in the United States.

So when you hear terms such as “globalization” and “the global economy”, it is important to keep in mind that those are code words for the emerging one world economic system that is systematically wiping out the U.S. middle class.

We keep hearing about how the U.S. economy is being transformed from a “manufacturing economy” into a “service economy”.  But “service jobs” are generally much lower paying than “manufacturing jobs”.  The number of good paying “middle class jobs” in the United States is rapidly decreasing.  So how can the U.S. middle class survive in such an environment?

What makes things even worse for manufacturers in the United States is that other nations often impose a “value-added tax” of 20 percent or more on U.S. goods entering their shores and yet most of the time we do not reciprocate with similar taxes.

But whenever someone mentions how incredibly unfair and unbalanced our trade agreements with other nations are, they are immediately labeled as a “protectionist”.

Well, someone should be looking out for U.S. interests when it comes to trade, because the current state of the global economy is ripping the U.S. middle class to shreds.

Right now, the United States consumes far more wealth than it produces.  This nation buys much, much more from the rest of the world than they buy from us.  This is called a “trade deficit”, and it is one of the most important economic statistics.  The U.S. runs a massive trade deficit every single year, and it is wiping out our national wealth, it is destroying our surviving industries and it is absolutely shredding middle class America.

The truth is that the global economy is bad for America.  The following are 23 facts which prove that globalism is pushing the standard of living of the middle class down to third world levels….

#7 Do you remember when the United States was the dominant manufacturer of automobiles and trucks on the globe?  Well, in 2010 the U.S. ran a trade deficit in automobiles, trucks and parts of $110 billion.

#8 In 2010, South Korea exported 12 times as many automobiles, trucks and parts to us as we exported to them.

#9 The U.S. economy now has 10 percent fewer “middle class jobs” than it did just ten years ago.

#10 The United States currently has 7.7 million fewer payroll jobs than it did back in December 2007.

#14 In China, working conditions are so bad that large numbers of “employees” regularly try to commit suicide.  One major employer, Foxconn, has even gone so far as to install “anti-suicide nets” in an attempt to keep their employees from jumping off of their buildings.

#15 Wages for workers in China are incredibly low.  For example, one facility in the city of Longhua that makes iPods employs approximately 200,000 workers.  These workers put in endless 15-hour days but they only make about $50 per month.

#16 In Bangladesh, manufacturing workers toil in absolutely horrific conditions and make an average of about $38 per month.

#17 In Vietnam, teenage workers often work seven days a week for as little as 6 cents an hour making promotional Disney toys for McDonald’s.

#20 In the United States today, 6.2 million Americans have been out of work for 6 months of longer.

#22 When you adjust wages for inflation, middle class workers in the United States make less money today than they did back in 1971.

#23 According to Willem Buiter, the chief economist at Citigroup, China will be the largest economy in the world by the year 2020, and India will surpass China by the year 2050.

Those that promote “free trade” can never explain how the U.S. middle class is going to continue to have plenty of jobs in the new global economy.

Already, there are quite a few formerly great U.S. cities (such as Detroit) that are beginning to resemble third world hellholes.  If something is not done about our massive trade imbalance, even more cities are going to follow Detroit into oblivion.

Well, it is time to stop listening to the politicians that are promoting “the global economy”.  They are lying to us.

Globalism is great for nations such as China and it is helping multinational corporations make huge profits, but for the U.S. middle class it is an economic death sentence.

If you want an America where there are less jobs, where more Americans are on food stamps and other anti-poverty programs and where our cities continue to be transformed into deindustrialized hellholes, then you should strongly support the emerging global economy.

But if you care about the standard of living of the U.S. middle class and you want for there to be some kind of viable economic future for your children and your grandchildren then you had better start caring about these issues and doing something about them.