I am not pretending to know what will, or what will not happen. What I know for sure is that the elitists (and their puppet governments) around the world have built huge high security underground facilities.

And they have stockpiled enormous amounts of food & water supplies.

… and another strange ‘coincidence’:

This was probably done by some hobby astronomers, that had obviously nothing else to do, with planks at night, right? 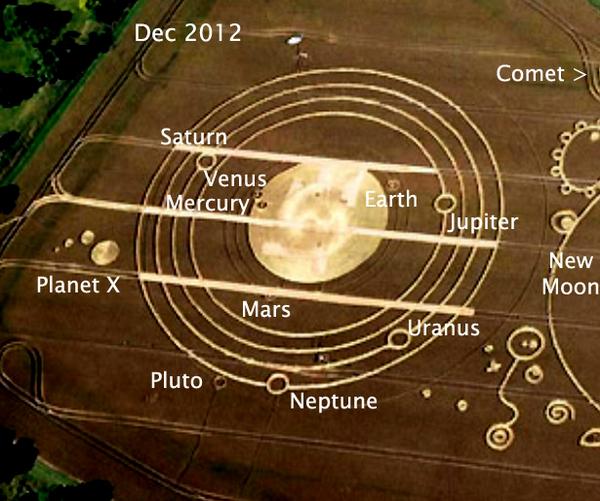 What a nice detailed crop circle!

So ‘maybe’ that time is now, but a real master said it won’t be in 2012, but years later. (This master could heal the sick, manifest out of thin air, could make cars invisible for the military during night curfew. She put a baby, that has been (accidentally) fully aborted and discarded back into the mothers womb with her mind. She could easily point out where to dig for wells, that are still flowing 45 years later on.  You cold ask her any question and she knew the answer. For example if your question was about a book, then she was able to read it in seconds, knowing it in and out, incl. knowing everything about the author and his thoughts when he was writing the book. And she correctly predicted the future.):

You know how you sometimes can sense that something is present even though you can’t see it? Well, astronomers are getting that feeling about a giant, hidden object in space.

And when we say giant, we mean GIANT. 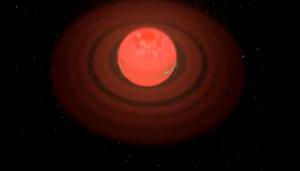 They’ve found the largest planet ‘IN OUR SOLAR SYSTEM’!. It orbits our Sun in a far elliptical orbit, and is said to be 4x’s the size of Jupiter! It has a helium and hydrogen atmosphere. It’s most likely to have moons! This planet fits the exact description of Planet X!

So, one must ask, why are they suddenly telling us now? Scientists have known about this planet since 1983 ( Read article below) and they’ve been using WISE and IRAS to monitor it. Does this mean it will be visible this year? I’m thinking so. They have no choice but to tell us as it will viewable to everyone w/o a telescope this year. And why are they not calling this planet by its real name? Nibiru? Planet X? Well, that would mean that all of us so called “conspiracy theorist’s” and our ancient ancestors, were right all along!

NASA WISE Telescope shows a Giant Planet next to the Solar System. February 13, 2011. NASA confirms that is tracking Hercolubus, at the moment scientists call it as Tyche. The NASA Wide-field Infrared Survey Explorer (WISE) telescope is showing a giant planet next to the Solar System. Tyche (Hercolubus) is 4 times bigger than Jupiter and orbit at the outer edge of the Solar System.Scientists are just analyzing the data gathered by a NASA space telescope WISE, it shows a giant planet up to four times the mass of Jupiter lurking in the outer Oort Cloud, the most remote region of the solar system. The orbit of Tyche (Hercolubus) would be 15,000 times farther from the Sun than the Earth’s, and 375 times farther than Pluto’s.

The first tranche of data is to be released in April, and astrophysicists John Matese and Daniel Whitmire from the University of Louisiana at Lafayette think it will reveal Tyche (Hercolubus) within two years.

This means that NASA considers impossible to cover-up the Hercolubus approaching in two years.

Once Tyche (Hercolubus) has been located, other telescopes could be pointed at it to confirm it.

The IAU would also have the final say about the giant planet name. To the Greeks, Tyche was the goddess responsible for the destiny of cities. Her name was provisionally chosen in reference to an earlier hypothesis, now largely abandoned, that the Sun might be part of a binary star system with a dim companion, tentatively called Nemesis, that was thought responsible for mass extinctions on Earth. In myth, Tyche was the good sister of Nemesis.

Tyche (Hercolubus) has an atmosphere much like Jupiter’s, with colorful spots and bands and clouds, Professor Whitmire said. “You’d also expect it to have moons. All the outer planets have them,” he added.

What will make it stand out in the WISE data is its temperature, predicted to be around -73C, four or five times warmer than Pluto. “The heat is left over from its formation,” Professor Whitmire said. “It takes an object this size a long time to cool off.”

Most of the billions of objects in the Oort Cloud — a sphere one light year in radius stretching a quarter of the distance to Alpha Centauri, the brightest star in the southern constellation — are lumps of dirty ice at temperatures much closer to absolute zero (-273C).

A few of these are dislodged from their orbits by the galactic tide — the combined gravitational pull from the billions of stars towards the centre of the Milky Way — and start the long fall into the inner solar system.

As these long-period comets get closer to the Sun, some of the ice boils off, forming the characteristic tails that make them visible.

Professors Matese and Whitmire first proposed the existence of Tyche (Hercolubus) to explain why many of these long-period comets were coming from the wrong direction. In their latest paper, published in the February issue of Icarus, the international journal of solar system studies, they report that more than 20 per cent too many of the long-period comets observed since 1898 arrive from a band circling the sky at a higher angle than predicted by the galactic-tide theory.

No other proposal has been put forward to explain this anomaly since it was first suggested 12 years ago.

In short: NASA and scientists are going to inform about the Hercolubus approaching in the short term, because it will be impossible to hide for more time.

A heavenly body possibly as large as the giant planet Jupiter and possibly so close to Earth that it would be part of this solar system has been found in the direction of the constellation Orion by an orbiting telescope aboard the U.S. infrared astronomical satellite. So mysterious is the object that astronomers do not know if it is a planet, a giant comet, a nearby “protostar” that never got hot enough to become a star, a distant galaxy so young that it is still in the process of forming its first stars or a galaxy so shrouded in dust that none of the light cast by its stars ever gets through. “All I can tell you is that we don’t know what it is,” Dr. Gerry Neugebauer, IRAS chief scientist for California’s Jet Propulsion Laboratory and director of the Palomar Observatory for the California Institute of Technology said in an interview.

The most fascinating explanation of this mystery body, which is so cold it casts no light and has never been seen by optical telescopes on Earth or in space, is that it is a giant gaseous planet, as large as Jupiter and as close to Earth as 50 billion miles. While that may seem like a great distance in earthbound terms, it is a stone’s throw in cosmological terms, so close in fact that it would be the nearest heavenly body to Earth beyond the outermost planet Pluto. “If it is really that close, it would be a part of our solar system,” said Dr. James Houck of Cornell University’s Center for Radio Physics and Space Research and a member of the IRAS science team. “If it is that close, I don’t know how the world’s planetary scientists would even begin to classify it.”

The mystery body was seen twice by the infrared satellite as it scanned the northern sky from last January to November, when the satellite ran out of the supercold helium that allowed its telescope to see the coldest bodies in the heavens. The second observation took place six months after the first and suggested the mystery body had not moved from its spot in the sky near the western edge of the constellation Orion in that time. “This suggests it’s not a comet because a comet would not be as large as the one we’ve observed and a comet would probably have moved,” Houck said. “A planet may have moved if it were as close as 50 billion miles but it could still be a more distant planet and not have moved in six months time.

Whatever it is, Houck said, the mystery body is so cold its temperature is no more than 40 degrees above “absolute” zero, which is 459 degrees Fahrenheit below zero. The telescope aboard IRAS is cooled so low and is so sensitive it can “see” objects in the heavens that are only 20 degrees above absolute zero. When IRAS scientists first saw the mystery body and calculated that it could be as close as 50 billion miles, there was some speculation that it might be moving toward Earth. “It’s not incoming mail,” Cal Tech’s Neugebauer said. “I want to douse that idea with as much cold water as I can.”

Planet X Nibiru Tyche. The video below is a simulation based on research of brown dwarf stars spawned by a heavy interest in A possible galactic neighbor closer to us than we might already know. My opinion on this is if Planet X , Nibiru, Tyche or whatever is that if it is found it will be closer to us than proxima centauri and on a friendly orbit.

This video is a ballpark estimate of what one of these T class brown dwarf stars might hold as far as planets go using Jupiter as a comparison. I tried my best to keep accurate with distances , tidally locking being most moons are tidally locked .

The Atmospheres on these planets with tidally locking was a fun assumption being there really isnt a good example of a tidally locked moon (except blurry TITAN) with an atmosphere that isnt frozen.

Planet 1 is a burnt rock , Planet 2 is a semi frozen ball of nitrogen carbon etc. losing it’s atmosphere. Planet 3 is a thermal dynamic heavy steamy atmosphere on the lit side a, ice cap on the other and the middle rain and a 100 atmosphere earth like atmosphere at the surface if you can handle the pressure. Planet 4 is most earth like but with a very heavy atmosphere as well and it’s not 100% tidally locked due to planet 3′s tugging influence.
Planet 5 at the end is a metaphor for the corporate matrix we call planet earth.

Febr 14th, 2011 –  Dailymail: Largest planet in the solar sytem could be about to discovered and it’s up to four times the size of jupiter http://www.dailymail.co.uk/sciencetec…

Source: The Truth Behind The Scenes