– Housing Armageddon: 12 Facts Which Show That We Are In The Midst Of The Worst Housing Collapse In US History 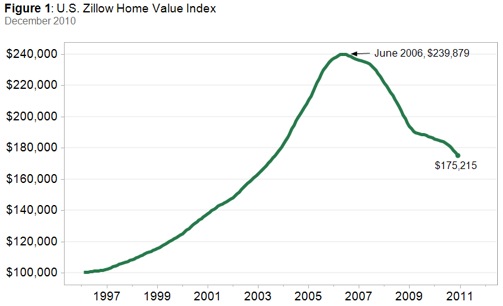 The average home is down 27 percent from peak. This puts the total loss from the housing crash at an incredible $9.8 trillion.

WASHINGTON (AP) — Home prices in a majority of major U.S. cities tracked by a private trade group have fallen to their lowest levels since the housing bubble burst, and analysts expect further declines this year.

The Standard & Poor’s/Case-Shiller 20-city home price index fell 1 percent in December from November. Prices fell in all but one of the metropolitan markets tracked.

The only city to see a gain was Washington, where hiring by the federal government has helped boost the region’s job market.

The housing sector is struggling even while the rest of the economy is showing signs of a slow but steady recovery. The latest evidence of this divide came Tuesday when the Conference Board said its Consumer Confidence Index rose in February to its highest point in three years. The index surveys how people feel about hiring and income, and how they see that changing over the next six months.

By contrast, the outlook for housing in 2011 is not promising. Construction of new homes has fallen to a rate of about 600,000 homes built per year. In a healthy economy, builders expect to construct about 1 million homes each year. Homeowner vacancy rates are near record highs and the creation of new households in the United States is at its lowest point in four decades.

“Despite improvements in the overall economy, housing continues to drift lower and weaker,” said David M. Blitzer, chairman of the index committee at Standard & Poor’s.

The damage from the real estate bubble has spread well beyond the Sun Belt, where new homes cropped up at a frantic pace during the mid-2000s. In many places, prices are expected to keep falling for at least the next six months and several analysts said they expect prices to fall at least another 5 percent.

Some of the worst declines are in cities hit hardest by foreclosures and high unemployment, including Detroit, Phoenix and Tampa. A home that sold for $250,000 in the Motor City in 2000 now sells for roughly $163,150, according to the housing report. Homes in Las Vegas and Cleveland now sell, on average, for less than they of what they did a decade ago. Many people are holding off buying or selling homes because they fear the market hasn’t hit bottom yet.

A large number of homes that aren’t selling are contributing to a second wave of price declines since the boom years. Many of them have been vacant for months.

In December, prices fell for the sixth straight month and for the eighth time in the past 11 months. Foreclosures are also expected to increase as the year goes forward.

“There’s just way too many homes out there relative to demand and we’re not going to see that change anytime soon,” said Joshua Shapiro, chief U.S. economist for MFR Inc.

The housing recovery is uneven across the United States. Coastal cities in California and the Northeast are faring much better than the Midwest and Southeast. That’s mainly because they benefit from expensive and somewhat recession-proof housing markets buoyed by low unemployment and limited new construction.

The Case-Shiller report measures home price increases and decreases relative to prices in January 2000 and gives an updated three-month average for the metropolitan areas it looks at.