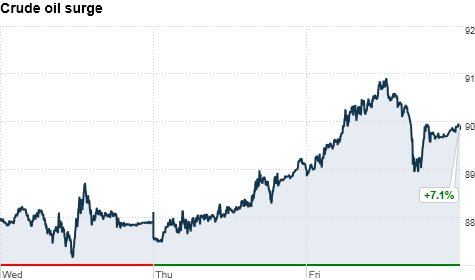 Brent crude, the benchmark European oil standard, hit a 2-1/2-year high of $105 a barrel before retreating slightly to settle at $102.52 a barrel. An overhang of supply has been keeping U.S. prices on the low side … for now.

“All eyes are on the Middle East and North Africa crisis regarding potential disruptions in oil exports that could drive crude oil prices even higher,” Myrto Sokou, an analyst at Sucden Financial, wrote in a research report.

Monday’s spike follows violent clashes in Libya over the weekend that were spurred, at least in part, by angst over high unemployment. The unrest has left at least 233 people dead in Libya, according to Human Rights Watch.

Tensions remained high in the North African nation Monday, albeit a far cry from the tumult seen Sunday, when the violence and chaos came to Libyan leader Moammar Gadhafi’s doorstep Tripoli, Libya’s capital, for the first time.

BP confirmed Monday that it is preparing to evacuate about 140 families and non-essential staff from Tripoli. The oil company said none of its operations were impacted … yet. But it has suspended preparations for a drilling project in Libya’s western desert.

Shell Oil said it closed its Tripoli office, but employees are able to work from home. So far, only dependants of its expatriate staff have been relocated out of the country. “We continue to monitor the situation very closely,” said Shell spokesman David Williams.

Libya produces 1.6 million barrels of oil a day, according to the U.S. Energy Information Administration.

The world consumes 87.5 million barrels of oil day. But the balance between what it produces and what it consumes is, as always, tight — which makes Libya’s 1.6 million barrels a day important.

“As long as the situation in this key oil-production region of the Middle East and North Africa remains so volatile, expect prices for the commodity to remain supported,” said Ilya Spivak, an analyst at DailyFX, in a research report.

The unrest in Libya is part of a wave of protests across the region that started in Tunisia earlier this year and spread to Egypt, where antigovernment protesters toppled the regime of Hosni Mubarak earlier this month.

Protests have been reported in other North African nations, including Morocco and Algeria.

Governments in Yemen and Iraq have also been challenged.

In Bahrain, a small island country next to oil rich Saudi Arabia, about 10 protesters are thought to have died in five days of protests, but opposition activists say dozens more are unaccounted for.

Iran, one of the world’s largest oil producers, has seen a renewal of the opposition that has simmered since the country’s 2009 election, when hundreds of thousands of people filled Tehran streets to denounce the re-election of President Mahmoud Ahmadinejad.

Oil prices jumped last week amid reports that Iran was moving warships through the Suez Canal on their way to Syria.

The Suez Canal, located between Asia and Africa, is a key passageway for international trade. Millions of barrels of oil move through it every day on the way to both Europe and North America.

The unrest is expected to be a topic of discussion at Tuesday’s meeting of the International Energy Forum, a gathering of global energy ministers, in Saudi Arabia.

Meanwhile, stock markets in Europe were also under pressure. The DAX in Germany and the CAC 40 in Paris both fell 1.4%, while the FTSE 100 in London slid 1.1%.

Asian stocks ended mixed. The Heng Seng in Hong Kong fell 0.5%, while the Shanghai composite jumped 1.1%. The Nikkei in Japan closed about 0.1% higher.

Markets in the United States were closed Monday for the Presidents’ day holiday.