After the coming greatest financial collapse in world history the US will not be the world’s largest economy anymore.

China remains on target to take the number-one slot from the US between 2020 and 2030, after leapfrogging Japan 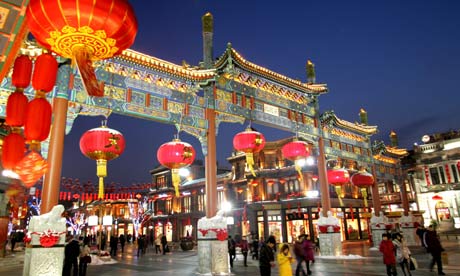 China has leapfrogged Japan to become the world’s second-largest economy, a title Japan has held for more than 40 years.

But, despite Japan’s displacement from second slot, its leadership welcomed the figures as a boost to Asia and as an opportunity for the country’s beleaguered exporters.

Japan’s economy shrank 0.3% in the last quarter of 2010, a decline attributed to slow domestic consumption following the end of government incentives to buy, among other items, low-emission cars.

Export and production data, however, indicate Japan’s dip may be temporary.

In contrast to the air of resignation that greeted last year’s first indications that Japan had relinquished the No 2 position it had held since 1968, senior political figures have been speaking of China’s performance in glowing terms.

Their message: sustained demand from the world’s most populous country can only be good for Japan.

Japan’s economics minister, Kaoru Yosano, said: “The fact that China’s economy is booming is welcome news for Japan as a neighbouring country. We are not engaging in economic activities to vie for ranking but to enhance people’s lives.”

In the fourth quarter, Japan’s economy shrank at an annualised rate of 1.1%, a sharp reversal from the third quarter’s 3.35% growth.

In the 1980s, Japan’s economic ascent provoked both fear and admiration but the boom unravelled after the property bubble burst. It never fully recovered from the stagnation of the 1990s – its “lost decade” – and has yet to address deflation, an ageing population and ballooning public debt.

China’s trade surplus dropped in January to the lowest in nine months because of soaring import demand, new figures showed. It fell to $6.5bn last month from $13.1bn in December. Imports leapt 51% in January, while exports grew 38%.

Due to its large population, China remains much poorer than Japan, with GDP per head about a fifth that of its neighbour when purchasing power differences are taken into account.

Japan now exports more goods to China than to any other country. Shipments to China accounted for 19.4% of total exports last year, with the US accounting for 15.4%.

Robust Chinese demand has prompted a brighter prognosis for Japan in recent months – a trend some economists say is likely to continue.

Yoshiki Shinke, senior economist at Dai-ichi Life Research Institute in Tokyo, said: “The data confirms that the [Japanese] economy entered a lull on a downturn in private consumption, but recent monthly economic indicators such as output and exports show it is unlikely that the lull will be prolonged.

“The economy will continue to depend on external demand for growth,” Shinke added, given that demand at home could be further dampened by slow income growth, job insecurity and the withdrawal of subsidies for energy-efficient cars and electrical appliances.

Yet Japan must remain wary of a possible slowdown in demand overseas, particularly while its own consumers are so reluctant to spend, Yosano warned: “We need to keep a close watch on risks from overseas economies and currency moves.”

Japanese domestic politics pose an additional risk to recovery. The prime minister, Naoto Kan, has warned that Japan must act now to reduce its public debt – twice the size of its GDP – while encouraging growth.

But he has so far failed to persuade opposition MPs, who control the upper house of parliament, to approve his 92.4tn yen spending plans.