Yu Lianmin, a cotton farmer in Huji, China, harvested 6,600 pounds of cotton this year. Despite record cotton prices, he didn’t sell any of it. 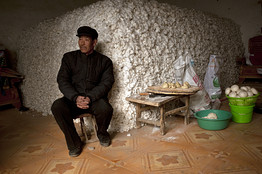 Farmer Yu Feng tends his stockpile of roughly 7,700 pounds of cotton that he is storing in his home in Huji, China.

Instead, mounds of cotton are piled up in two empty rooms of Mr. Yu’s home, and the homes of many of the farmers in his small township of Yujia, which is part of the bigger township of Huji in northern Shandong province, 220 miles southeast of Beijing. The farmers are holding out for higher prices, aiming to help overcome higher costs of labor and fertilizer, which are up about 20% in the past year.

“I think there’s still hope for prices to go higher,” he said.

The amount of cotton held in hamlets throughout China is unknown, but, with 25 million cotton farmers, a Chinese cotton agency estimates it could amount to about 9% of the world’s cotton supply. And the situation is occurring throughout the supply chain. Many ginners and merchants in China are keeping warehouses full, according to the agency, in an attempt to obtain higher prices.

Expectations that prices will rise are driving the apparent stockpiling, which causes short-term shortages and leads prices to rise further. The situation is complicating an already volatile picture for cotton, which has jumped to 140-year highs in the U.S. and has become a symbol of brewing commodity inflation around the globe.

Farmer Yu Feng tends his stockpile of roughly 7,700 pounds of cotton that he is storing in his home in Huji, China.

China, the world’s largest cotton consumer, is the biggest missing piece in the global cotton puzzle, though it isn’t the only one. India stopped publishing data on cotton mill use, exports and imports in March, citing a change in a computer system. Pakistan, the third-largest user, doesn’t publish data on cotton production, consumption or stocks until three years after each season. Uzbekistan, the third-largest exporter, refused to publish data on exports or stocks, making it a constant subject of rumor, according to the International Cotton Advisory Committee, an association of governments of cotton-producing, consuming and trading countries.

Moreover, there is no data published on cotton stocks in Brazil, Argentina or Mexico.

“The problem with keeping the information from the market is that the information then becomes a source of endless rumors and speculation,” said Terry Townsend, executive director of the International Cotton Advisory Committee.

Much of the rise has been driven by worries that the world is running short of cotton, in large part because of demand from China, whose imports have been surging. Chinese cotton imports in December 2010 more than doubled from the year-ago month. But with piles of cotton apparently being stashed throughout the country, some argue that there is more of the commodity available, and that Chinese imports could significantly slow once that cotton is unleashed on the market.

The apparent hoarding has the effect of making an already tight market—production has been falling as demand is increasing—look even more strained.

In China, merchants often do their own surveys of farmers. But for others in the U.S. and elsewhere, there is little ability to gather intelligence. The Chinese government also has stockpiled cotton as part of its strategic reserve, and gives little detail about how much and of what quality.

“It’s difficult to know where there’s an artificial short supply in China based on speculation or hoarding, or if there’s a real shortage,” said Jordan Lea, chairman of Eastern Trading Co., a cotton merchant in Greenville, S.C. “We have assumed that China and other countries will need to import more U.S. cotton. But if indeed that’s not the case, the market will fall.” The U.S. is the world’s largest exporter of cotton.

That uncertainty has helped exacerbate the swings in the cotton market, and has prompted an outcry from governments, producers and users around the world. Cotton was the most volatile of all the 53 exchange-traded commodities in 2010, according to the International Cotton Advisory Committee. Hoarding by Chinese suppliers is one of the biggest concerns, they said. Thursday, cotton prices rose to a 140-year record, closing at $1.6939 a pound on the ICE Futures U.S. Friday, cotton fell 4.64 cents, or 2.7%, to $1.6475.

“It’s a vicious cycle of accumulation of raw materials and risks. We don’t know when the whole thing will explode,” said Gong Wenlong, chief executive of the China National Cotton Information Center, a government-funded cotton information provider. He estimates that about 1.94 million metric tons of cotton is being kept off the market, compared with China’s production last year of 6.14 million tons.

In Yujia, more than 90% of the villagers make a living from planting cotton. Middlemen drive to the village to buy cotton from the farmers each winter. However, transactions are few this year.

Cotton has been farmed here for generations. Mr. Yu, who has been planting cotton for more than 10 years, said this is the best year he has seen for cotton prices. Prices shot up early in the season, then dropped late last year before rising again. Mr. Yu decided during the downturn to hang on for higher prices.

“We couldn’t accept the prices,” Mr. Yu said. He said he keeps his cotton in two empty rooms in his home, which he shares with his parents, and has locked the door to protect it from fire and theft.

More than 50% of the harvested cotton in Huji still is being held by farmers, including Mr. Yu., said Yu Dingyue, a planting director overseeing more than 10 villages. Shandong is China’s second-largest cotton-producing province.

The farmers estimate they can keep the cotton until April or May, if stored properly.

“Cotton output was smaller this year and costs were higher. If prices are not going higher, we couldn’t cover our costs,” said Yu Feng, another farmer in the village. His cotton is piled in a room that also is used to prepare food for the family.

Mr. Yu, the planting director in Huji, said it is hard to talk farmers into selling the cotton. The only thing he could do to help is to make sure their cotton stays safe, particularly because the winter has been so dry and the dangers of fire are increasing.

“I told them not to cook or smoke in those cotton-filled rooms,” he said.