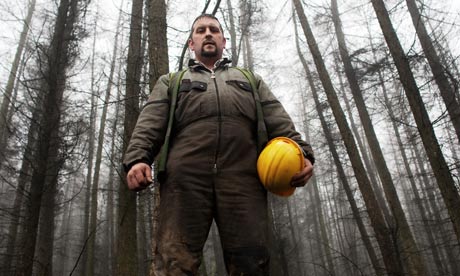 Along with the ability to jump between species, it is the way the disease spreads and how fast it kills that is frightening the forestry industry. Thousands of spores can be carried on the wind, as well as on the shoes and bike tyres of the tens of thousands of people who spend leisure time in Britain’s already dwindling forests every year. Larch makes up around 5% of the forest cover in the British Isles, and the nature of the light, open woodlands it creates is especially popular for pursuits such as mountain biking, horse riding and hiking.

At this Forestry Commission site in Afan Valley, some 800 hectares of trees have to be felled. Already 150 have come down, leaving ugly scars on the hills and causing water drainage problems that add to the area’s flood risk. They hope they will get another 250 felled by spring. For Hill, 40, who first worked in this wood as a 12-year-old learning forestry from his father, it’s difficult to see: “I was due to be coming here to thin this lot, but now we’re flattening them all; it’s shocking. I’d hoped to be able to bring my son up here, but that’s not going to happen now. And they won’t be able to replant for a few years, so it’s not going to look nice.”

Other forests are undergoing similar work on their diseased trees, with the sudden demand creating a shortage of contractors and machinery. Many private landowners are having to get out there with a chainsaw to try to meet their legal requirements.

The winter needle drop of the coniferous larch makes it hard to tell infected from uninfected trees, so scientists and tree lovers are hoping this battle against nature’s clock can at least help to slow the spread before the spring regrowth causes the infection rates to rise again with more diseased spores.

“The disease took us by surprise when it jumped species, and we don’t understand why it’s not in other species yet. Dealing with an organism that can do that, well, who knows where it will go next?” said Burgess. “We know it’s performing differently in this country to the way it performed in the US, so it’s unlikely this strain has come over from there; it’s far more likely to have been imported from Asia, perhaps via Europe.

“We have seen an influx of new pests and diseases in the past decade – the processionary moth is causing great problems in west London after being imported on an oak bought to screen a supermarket car park. But the ramorum is certainly the big one to date, and we are just holding our breath until we can carry out more surveys when this year’s foliage emerges.

“I think we can forget eradicating it; we have to work with nature and we’re going to have to live with it. The question is whether or not we’re lucky and have a fighting chance at containing it,” he added. “Unfortunately we are very fond of exotic plants from other parts of the world, and that leaves the door wide open to risk.”

The rhododendron, a non-native bush hated by many for the way it invades woodlands, has been identified as a key culprit in spreading the spores to trees. Some experts believe an imported mature bush was the route into the country for sudden oak death.

Dr David Slawson, of the Food and Environment Research Agency, said the phytophthora had probably come from Asia via Europe. “Parks, gardens and garden centres are all working closely with us to combat these pathogens on commercially traded plants, but they can move around the world now; there’s a much increased risk, especially with warmer, wetter summers.

“This disease wasn’t even known to science and it shows how people need to be vigilant. Buying locally produced, smaller plants for your gardens wouldn’t hurt either; these big imported plants are far more likely to be a risk.”

As Hill works through the larches his father once tended, Lee Dawson, head of planning for the Forestry Commission in Coed Y Cymoedd Forest District, is close by, chasing off two mountain bikers.

“We can put up signs, but can’t police it,” he said. “People will just ignore the dangers and carry the spores out on their tyres and their boots. People love larch forests because they are open and light and you can see around you and they will really miss them if they go. Everyone is really concerned, especially with the speed at which it kills the trees.

“The next year will be critical. At the moment it’s all hands on deck trying to get as many trees down before the spring flush, when they start spreading the infection once more. We’ve done our bit and got off the mark. It’s just down to the phytophthora doing its worst now.”