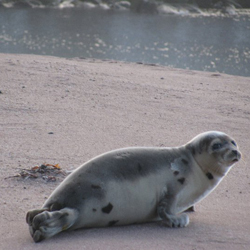 A young seal on a beach near the southern Labrador community of L’Anse au Clair in early January. (Courtesy: Derrick Letto)

People on the north coast of Labrador say scores of dead seals have been washing ashore since early December.

A conservation officer with the area’s Inuit government estimated late last week that hundreds of adult and young seals have died in the area between Hopedale and Makkovik this winter.

The Department of Fisheries and Oceans (DFO) is testing the carcasses, but Nunatsiavut conservation officer Ian Winters said many people in the area believe DFO hasn’t acted quickly enough.

“I think they should have been up here earlier, if you’re asking me. A lot of people said the same thing. So, maybe it’s not on top of their agenda,” he said.

Usually at this time of year seals are on sea ice south of Hopedale, said Winters, but he said there is very little ice there now.

Last month, people in northern Labrador found the bodies of dead seal pups on the coast.

At the time, a federal seal researcher said the early birth of seal pups in Labrador may be an indication the area’s seal population has grown too large.

Stenson said the DFO received five reports of seals giving birth on the coast of Labrador in December, although the nomadic sea mammals normally give birth in late February or early March.

He said the early births are happening on land rather than ice floes and it’s unlikely the newborn pups will survive.