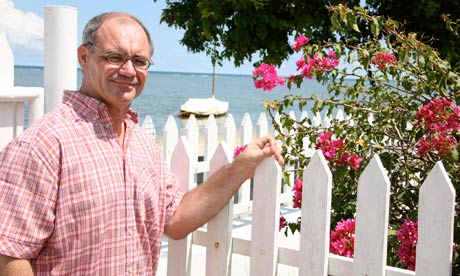 Rudolf Elmer in Mauritius: “Well-known pillars of society will hold investment portfolios and may include houses, trading companies, artwork, yachts, jewellery, horses, and so on.” Photograph: Rene Soobaroyen for the Guardian

The offshore bank account details of 2,000 “high net worth individuals” and corporations – detailing massive potential tax evasion – will be handed over to the WikiLeaks organisation in London tomorrow by the most important and boldest whistleblower in Swiss banking history, Rudolf Elmer, two days before he goes on trial in his native Switzerland.

British and American individuals and companies are among the offshore clients whose details will be contained on CDs presented to WikiLeaks at the Frontline Club in London. Those involved include, Elmer tells the Observer, “approximately 40 politicians”.

Elmer, who after his press conference will return to Switzerland from exile in Mauritius to face trial, is a former chief operating officer in the Cayman Islands and employee of the powerful Julius Baer bank, which accuses him of stealing the information.

He is also – at a time when the activities of banks are a matter of public concern – one of a small band of employees and executives seeking to blow the whistle on what they see as unprofessional, immoral and even potentially criminal activity by powerful international financial institutions.

Along with the City of London and Wall Street, Switzerland is a fortress of banking and financial services, but famously secretive and expert in the concealment of wealth from all over the world for tax evasion and other extra-legal purposes.

Elmer says he is releasing the information “in order to educate society”. The list includes “high net worth individuals”, multinational conglomerates and financial institutions – hedge funds”. They are said to be “using secrecy as a screen to hide behind in order to avoid paying tax”. They come from the US, Britain, Germany, Austria and Asia – “from all over”.

Clients include “business people, politicians, people who have made their living in the arts and multinational conglomerates – from both sides of the Atlantic”. Elmer says: “Well-known pillars of society will hold investment portfolios and may include houses, trading companies, artwork, yachts, jewellery, horses, and so on.”

“What I am objecting to is not one particular bank, but a system of structures,” he told the Observer. “I have worked for major banks other than Julius Baer, and the one thing on which I am absolutely clear is that the banks know, and the big boys know, that money is being secreted away for tax-evasion purposes, and other things such as money-laundering – although these cases involve tax evasion.”

Elmer was held in custody for 30 days in 2005, and is charged with breaking Swiss bank secrecy laws, forging documents and sending threatening messages to two officials at Julius Baer.

Elmer says: “I agree with privacy in banking for the person in the street, and legitimate activity, but in these instances privacy is being abused so that big people can get big banking organisations to service them. The normal, hard-working taxpayer is being abused also.

“Once you become part of senior management,” he says, “and gain international experience, as I did, then you are part of the inner circle – and things become much clearer. You are part of the plot. You know what the real products and service are, and why they are so expensive. It should be no surprise that the main product is secrecy … Crimes are committed and lies spread in order to protect this secrecy.”

The names on the CDs will not be made public, just as a much shorter list of 15 clients that Elmer handed to WikiLeaks in 2008 has remained hitherto undisclosed by the organisation headed by Julian Assange, currently on bail over alleged sex offences in Sweden, and under investigation in the US for the dissemination of thousands of state department documents.

Elmer has been hounded by the Swiss authorities and media since electing to become a whistleblower, and his health and career have suffered.

“My understanding is that my client’s attempts to get the banks to act over various complaints he made came to nothing internally,” says Elmer’s lawyer, Jack Blum, one of America’s leading experts in tracking offshore money. “Neither would the Swiss courts act on his complaints. That’s why he went to WikiLeaks.”

That first crop of documents was scrutinised by the Guardian newspaper in 2009, which found “details of numerous trusts in which wealthy people have placed capital. This allows them lawfully to avoid paying tax on profits, because legally it belongs to the trust … The trust itself pays no tax, as a Cayman resident”, although “the trustees can distribute money to the trust’s beneficiaries”.

Julius Baer has denied all wrongdoing, and rejects Elmer’s allegations. It has said that Elmer “altered” documents in order to “create a distorted fact pattern”.

The bank issued a statement on Friday saying: “The aim of [Elmer’s] activities was, and is, to discredit Julius Baer as well as clients in the eyes of the public. With this goal in mind, Mr Elmer spread baseless accusations and passed on unlawfully acquired, respectively retained, documents to the media, and later also to WikiLeaks. To back up his campaign, he also used falsified documents.”