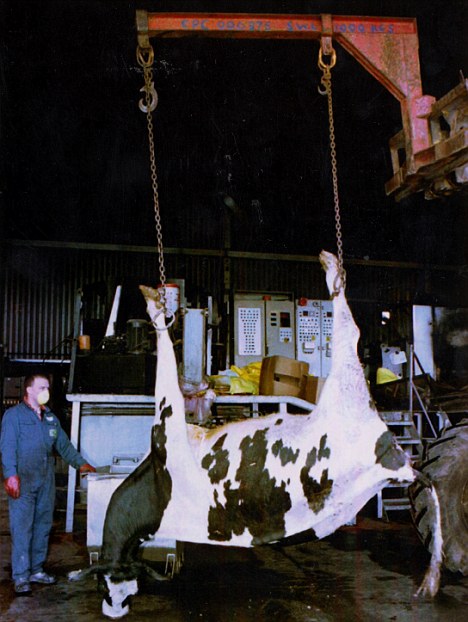 Risky business: People who work in abattoirs, slaughterhouses and laboratories could face a higher risk of catching BSE

And they fear that those who work in abattoirs, slaughterhouses and laboratories could be at risk.

Their study shows prions, the infectious agents which cause BSE and its human form, variant Creutzfeldt-Jakob Disease, can be dangerous if carried through the air.

In tests, mice who breathed them in developed the brain disease with ‘frightening’ speed and died.

The discovery could also explain why some of the victims in the 1990s were vegetarians.

Since the link between BSE-infected meat and vCJD was confirmed in 1996, 170 have died. Deaths peaked in 2000 when 28 died. Last year, there were three victims.

Prions, a type of protein, can spread on surgical instruments and in blood transfusions. It had been assumed they were not transmitted by air.

Just one minute’s exposure to the prions was enough to infect all the mice, Dr Aguzzi reports in the journal PLoS Pathogens.

The longer the exposure lasted, the sooner the mice developed symptoms of vCJD.

‘The mice who inhaled prions got sick with an efficiency that I personally find rather surprising and almost frightening,’ he said last night.

‘But you have to realize that this experiment was geared towards providing proof-of-principle. That means the mice were exposed to very concentrated aerosols. These concentrations would hardly ever be attained in real-life situations.’

Dr Aguzzi said health and safety rules in labs, slaughterhouses and animal feed plants did not usually include protection against airborne particles.

‘This previously unappreciated risk for airborne prion transmission may warrant re-thinking on prion biosafety,’ he said.

However, patients with CJD pose little risk because they do not breathe out prions, he added.

Prions are found in brain and spinal tissue and doctors believe the victims of vCJD were infected from eating contaminated beef.

However, some victims were vegetarians – raising the prospect that they were infected in another way.