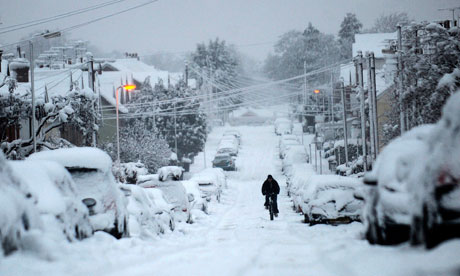 The amount of gas kept in storage in the UK is at its lowest level in five years for so early in the winter, according to National Grid.

Last month, was the coldest December since 1890, and the UK’s gas storage facilities, which are among the smallest in Europe, are already more than half empty as they cope with record demand. Domestic supplies of gas have also been exported to the continent via the Interconnector under-sea pipeline, because prices are higher there than in the UK.

As of Friday, the UK had enough gas in storage to meet in total about five and a half days’ consumption, given average winter temperatures, although storage facilities can release only a fraction of this each day. These facilities – mostly old gas fields such as Centrica’s Rough reservoir off the coast of Yorkshire – have in the past run down gradually during the winter and restocked over the spring and summer. But analysts said that suppliers have withdrawn stocks much earlier this year, with almost two months of the winter left to run.

Nick Campbell, analyst at the energy consultancy Inenco, said that Britain’s ability to import large quantities of liquefied natural gas (LNG) by tanker meant that the country no longer relied so much on storage facilities for security of energy supply. On one of the coldest days last month, a record quarter of all gas consumed in the UK came from LNG. But Britain’s LNG terminals are not regulated and operate in a global market. Energy companies will ship LNG to where prices are highest. In contrast, the country’s storage facilities are regulated by Ofgem.

When in opposition, Charles Hendry, the energy minister, accused the Labour government of failing to encourage the construction of new facilities. In the past the UK has relied on its North Sea supplies, but these are dwindling and the country now imports more than half its gas.

The supply system assumes that the market will import gas via pipelines from Norway and elsewhere in mainland Europe when demand is high. Controversially, UK energy companies do not have access to storage facilities in Europe, unlike their foreign counterparts.

National Grid has the power to slow the rate of withdrawal of supplies, but cannot order companies to replenish stocks once tanks become depleted. Businesses can also have their supply cut off to keep households running.