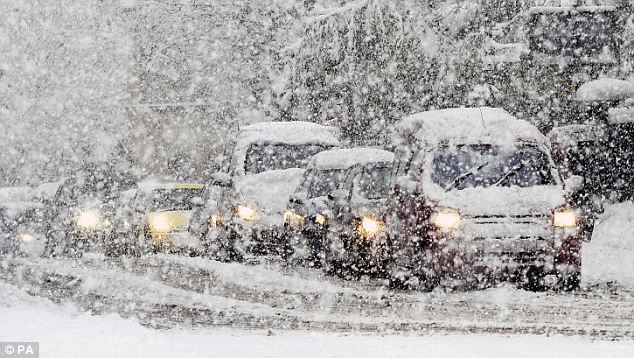 Cars try to make their way through the centre of York in the snow at the start of December. Councils could have been better prepared for the cold snap if they had been pre-warned by the Met Office

Jan. 04 — The Met Office warned ministers to expect an ‘exceptionally cold winter’ but then kept the prediction secret from the public.

The forecaster decided not to reveal the information because it was embarrassed after wrongly predicting a ‘barbecue summer’ in 2009, BBC analyst Roger Harrabin said.

Instead of a seasonal forecast, it offered only monthly snapshots.

The disclosure raises questions over whether transport authorities and councils could have been better prepared for the cold snap which brought chaos before Christmas.

As temperatures fell to a record low, train services were badly disrupted, roads were covered by snow and thousands were stranded at Heathrow as flights were cancelled and the airport struggled to clear the backlog.

Last night Mr Harrabin said: ‘With Britain shivering through a third winter in a row, shouldn’t the weather forecasters have warned us well in advance? Why didn’t the Met Office tell us?

‘The truth is it did suspect we were in for an exceptionally cold early winter, and told the Cabinet Office so in October.

‘But we weren’t let in on the secret because the Met Office no longer publishes its seasonal forecasts due to the ridicule it suffered for predicting a barbecue summer in 2009.

‘It did forecast in November that December would be bitter, but many of us may have taken the prediction with a truckload of salt.’

Last night the Met Office confirmed it had passed on the advice, but a spokesman denied that withholding it from the public was motivated by embarrassment.

‘We did brief the Cabinet Office in October on what we believed would be an
exceptionally cold and long winter,’ she said.

‘Despite media claims to the contrary, the decision not to publish any more seasonal forecasts came after we undertook public research about the way in which we deliver the weather.

‘It was the public who decided that a monthly outlook would be more useful than a seasonal forecast to give a general indication of what the weather will be like for the following month.’

The Met office was widely criticised in 2009 for predicting a barbecue summer which turned out to be a washout.

Mr Harrabin, who made his comments in the Radio Times, is one of the BBC’s most respected figures.

He has been reporting on the environment for more than 20 years and lectures at Oxford and Cambridge universities.

His claims come after the forecaster was criticised for its advocacy of climate change.

Campaigners have claimed it has become too interested in calling for action to cut carbon emissions.

They say it is in thrall to a belief that temperatures will rise in the long term, and so has neglected its focus on accurate short and medium term forecasts.

The BBC announced last year that it was considering dropping the Met Office as its official forecaster after 87 years. But in July it decided to extend the contract for a further five years.

The Cabinet Office said that Met Office forecasts are shared ‘as appropriate’ but could not say if roads authorities, airports and water companies had been passed the explicit deep freeze alert.

A spokesman said: ‘The Met Office provides the Government with regular updates throughout the year to inform short, medium and longer term planning. This information is shared as appropriate between departments and with local responders.

‘Government departments have, since winter 2009, continued to enhance preparedness and build resilience, informed by Met Office advice as well as the recommendations from David Quarmby’s review into last winter’s disruption and Dame Deirdre Hine’s review of the 2009 swine flu pandemic.’