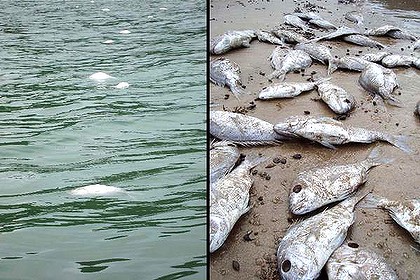 Horror haul … dead fish floating and washed up on the Coromandel Peninsula.

Hundreds of dead snapper have washed up on Coromandel beaches on the North Island of New Zealand, leaving holidaymakers perplexed.

The mysterious incident came as the southern United States was hit with a second unexplained mass bird death within a week.

People at Little Bay and Waikawau Bay, on the north-east of the peninsula, were stunned when children came out of the sea with armfuls of the fish and within minutes the shore was littered with them.

Charlotte Pearsall, whose family have lived at Little Bay for the last 30 years, said she had never seen anything like it.

“It was so surreal,” she said. “It’s such an incredible waste – it could’ve fed the whole northern tip of the Coromandel.”

People with binoculars said the snapper stretched as far as they could see and boaties reported “a carpet of floating fish further out to sea all along the coast”.

“We initially thought ‘woohoo a free feed’ but they had really cloudy eyes and you could see the birds had been at them. Some of them had no eyes,” Pearsall said.

Her parents called the Department of Conservation and were told it was most likely the fish had starved due to weather conditions, but Pearsall did not think that was the case as many of the fish looked big and healthy.

The Fisheries Ministry are currently investigating the situation and said they could not yet say what the cause was.

“Any commercial operators must record and report their catch,” said ministry field operations officer for Waikato, Bay of Plenty and the Coromandel Brendon Mikkelsen.

“They’re equally as concerned as we are . . . it’s not in anybody’s interests for fish to be abandoned at sea.”

Mikkelsen said it had happened before but given the quantity of fish it was very concerning.

People saw floating snapper in the water as early as 5am yesterday but the ministry only received reports 12 hours later.