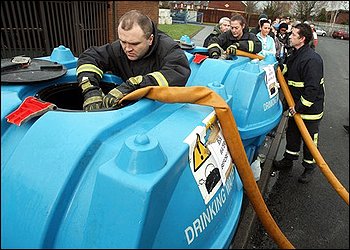 Members of the fire service fill tanks with water as people queue with empty bottles to collect water, as tens of thousands of homes and businesses are affected by severe water shortages caused by broken pipes, outside Avoniel leisure center in east Belfast, Northern Ireland, Wednesday, Dec. 29, 2010. Frustration and fear of disease mounted in Northern Ireland Wednesday as tens of thousands of people coped with a severe water shortage after much of the supply drained away through broken pipes following a deep freeze and a sudden thaw. (AP Photo/PA, Paul Faith) UNITED KINGDOM OUT, NO SALES, NO ARCHIVE (Paul Faith – AP)

BELFAST, Northern Ireland — Frustration and fears of disease mounted in Northern Ireland on Wednesday as 36,000 people were left without water, some for more than a week, after a deep freeze and a sudden thaw caused aging pipes to burst.

With reservoirs running low, water supplies were cut off in many towns and cities, and residents turned to emergency water tankers and bottled water for their cooking, cleaning and drinking needs.

Northern Ireland’s deputy first minister, Martin McGuinness, called the situation “a grave crisis,” and said people had been let down by their water supplier.

The Northern Ireland government scheduled an emergency meeting for Thursday to discuss the crisis.

Doctors warned of potential disease outbreaks if water was not restored, but officials said it would take several days or more to bring back all service.

“This may go on for another short period, but we are doing our best to keep it as short as possible to get those reservoir levels up and provide water to our customers,” said Liam Mulholland, of Northern Ireland Water.

He said the shortage had been aggravated by burst pipes in vacant properties spewing water as technicians try to trace and repair the problem.

The water company’s website listed some 80 towns and cities with disrupted water supplies and advised customers where to find emergency supplies.

There also was substantial flooding in Northern Ireland, with some floodwaters contaminated by sewage, raising public health concerns.

Alison McCrystal, spokeswoman for the water company, urged consumers not to wash their cars, hose down their properties or do “anything unnecessary” to waste water during the shortfall.

She said emergency crews were working around the clock to restore service and ease fears that contaminated water could lead to a disease outbreak.

McCrystal also pleaded for people with empty properties or businesses to check that their pipes were intact and their water turned off to prevent more wastage.

Some families have not had fresh running water for eight days, with officials predicting it will take several more days to restore normal service.

“People with young families have not been able to flush toilets and wash themselves, never mind get access to drinking water,” said Dr. Peter Maguire, a general practitioner. “It’s just not good enough. What’s happening is really not acceptable.”

Many cities have made leisure and recreation centers available to the public so they can use bathroom facilities and have a place to do washing.