‘Each dot is an entire galaxy containing billions of stars.’ 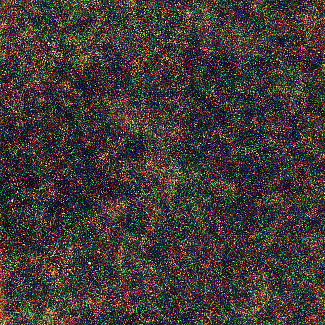 Thousands of galaxies crowd into this Herschel image of the distant Universe. Each dot is an entire galaxy containing billions of stars. For more than a decade, astronomers have puzzled over strangely bright galaxies in the distant Universe. These ‘luminous infrared galaxies’ appear to be creating stars at such phenomenal rates that they defy conventional theories of galaxy formation.

ESA’s Herschel infrared space observatory, with its ability for very sensitive mapping over wide areas, has seen thousands of these galaxies and pinpointed their locations, showing for the first time that they are packing themselves closely together, forming large clusters of galaxies by the force of their mutual gravity.