Mayor Bloomberg wants to bar sick Ground Zero workers from suing the city – but Reps. Jerry Nadler and Carolyn Maloney say they will push bills to allow people the choice to either sue or take money from a new victims’ compensation fund.

Bloomberg has cooked up a plan to withhold any of the $1 billion in insurance it received from the feds unless the city and its contractors in the Ground Zero cleanup get blanket immunity from lawsuits, officials told The Post.

“We don’t believe the city is liable for the acts of 19 terrorists,” said Deputy Mayor Ed Skyler.

Without immunity, he said, the city could be socked with suits seeking far more than $1 billion for years to come.

But the city’s demand has angered lawyers who want to start settling suits by more than 7,000 workers seeking compensation for respiratory illness, cancer and other diseases from toxic exposure. 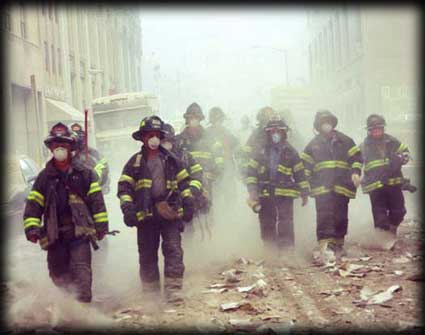 NEW YORK (AP) — It was called a “Christmas miracle,” but a last-minute compromise by Congress will provide a smaller aid package than originally envisioned to help victims of the Sept. 11 attack on the World Trade Center and the responders sickened as they worked in its smoldering ruins.

The measure passed by Congress and sent to President Barack Obama on Wednesday would provide up to $4.2 billion in new aid to survivors and responders, $2 billion less than originally proposed. Obama said he is eager to sign it.

The package provides $1.5 billion to monitor the health of rescue and cleanup workers and treat illnesses related to ground zero. It also reopens a victims’ compensation fund with $2.7 billion.

The bill was one of several major pieces of legislation passed in the waning hours of the lame-duck Congress. It would likely have faced much longer odds next year in the new, fiscally conservative Congress, where Republicans will hold greater sway.

Despite the scaling back of the package, a lawyer for Sept. 11 responders, Andrew Carboy, said his clients were “ecstatic.”

“This is the recognition, compensation and health care they so richly deserved,” he said.

Potential beneficiaries include retired New York police Detective Barbara Burnette, who was diagnosed with severe fibrosis of the lungs.

“That was a great Christmas present, and it’s going to be a happy new year for many of us that are really suffering and really need it,” she said.

The bill was years in the making but believed all but dead just days ago, when Republican senators blocked it from coming to a vote. But the measure cleared a key hurdle when Democratic Sens. Charles Schumer and Kirsten Gillibrand, both of New York, reached a compromise with Republican Sen. Tom Coburn, of Oklahoma, reducing the bill’s scope and cost.

It won unanimous consent in the Senate after the agreement was announced, and the House approved it hours later.

“The Christmas miracle we’ve been looking for has arrived,” Schumer and Gillibrand said in a joint statement.

The bill provides money for monitoring and treating illnesses related to ground zero and reopens a victims’ compensation fund for another five years to cover wage and other economic losses of sickened workers and nearby residents. Schumer and Gillibrand had sought $6.2 billion and keeping the compensation fund open for 10 years.

Coburn and other Republicans ultimately bowed to pressure after facing criticism from GOP leaders including former New York Mayor Rudy Giuliani, who led the city after the 2001 terror attacks and called the legislation “a matter of morality, of obligation.” Democrats also produced a video showing former Republican President George W. Bush and other GOP lawmakers praising the heroism of first responders in the days after the attacks.

Dozens of firefighters and other supporters traveled from New York to Washington, lobbying to keep the legislation alive. Several visited Coburn’s office Wednesday, urging him to drop his opposition.

One of those was John Feal, a 43-year-old former demolition supervisor from Long Island who lost a foot and suffered lung damage. He founded the Fealgood Foundation to provide assistance to people sickened after the attacks and has become a leading advocate for the measure.

Feal called the compromise bill “a seven on a scale of 10” but declared it a victory nonetheless.

“The men and women who risked their lives without prejudice that day went the last nine Christmases without knowing if the government would help them,” Feal said. “It’s a better Christmas gift than anything they could have asked for.”

But Marvin Bethea, a former paramedic who suffered permanent lung damage after helping with the cleanup and hasn’t worked since 2004, said he considered the compromise an insult to those who risked their lives at ground zero.

“If it ever happens again, why would anyone do what we did? To be forced to beg for help for nine years?” said Bethea, a 51-year-old Long Island resident. “I’m proud of the fact that I played a role that day, but I’m embarrassed by the way we’ve been treated.”

New York Mayor Michael Bloomberg said in a statement that the bill’s passage “affirms our nation’s commitment to protecting those who protect us” from danger.

“The events of that day were an attack on America by a foreign enemy, and addressing its health impacts is a national duty,” Bloomberg said.

Comedian and activist Jon Stewart was among the most visible champions of the bill, lampooning its GOP foes on his Comedy Central TV program, “The Daily Show.”

Nearly 16,000 responders and 2,700 people living near ground zero are sick and receiving treatment, supporters of the bill said. More than 40,000 responders are in medical monitoring, backers said.

The bill would be paid for with a fee on some foreign firms that get U.S. government procurement contracts. The bill also calls for extending fees on certain firms that rely on H-1B and L-1 visas.

Researchers have found that people exposed to the thick clouds of pulverized building materials at ground zero have high rates of asthma and sinus problems. Many firefighters also suffered reductions in lung power.

But doctors aren’t sure how many people are ill, and scientific doubt persists about how many of the hundreds of illnesses are linked to the trade center dust. Doctors still don’t know whether there is any connection between the dust and potentially fatal illnesses such as cancer.

The legislation is named for James Zadroga, a police detective who died at age 34. His supporters say he died from respiratory disease contracted at ground zero, but New York’s medical examiner said Zadroga’s lung condition was caused by prescription drug abuse.