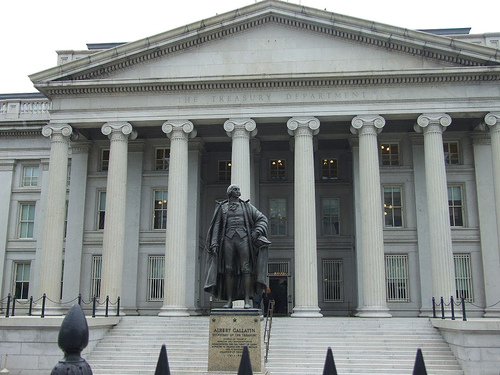 WASHINGTON (Reuters) – The U.S. government fell deeper into the red in fiscal 2010 with net liabilities swelling more than $2 trillion as commitments on government debt and federal benefits rose, a U.S. Treasury report showed on Tuesday.

The Financial Report of the United States, which applies corporate-style accrual accounting methods to Washington, showed the government’s liabilities exceeded assets by $13.473 trillion. That compared with a $11.456 trillion gap a year earlier.

Unlike the normal measurement of government intake of receipts against cash outlays, accrual accounting measures costs such as interest on the debt and federal benefits payable when they are incurred, not when funds are actually disbursed.

The report was instituted under former Treasury Secretary Paul O’Neill, the first Treasury secretary in the George W. Bush administration, to illustrate the mounting liabilities of government entitlement programs like Medicare, Medicaid and Social Security.

The government’s net operating cost, or deficit, in the report grew to $2.080 trillion for the year ended September 30 from $1.253 trillion the prior year as spending and liabilities increased for social programs. Actual and anticipated revenues were roughly unchanged.

The cash budget deficit narrowed in fiscal 2010 to $1.294 trillion from $1.417 trillion in 2009. But the $858 billion tax cut extension package enacted last week is expected to keep the deficit well above the $1 trillion mark for another year.

The latest Treasury report should fuel debate in Congress over spending cuts next year as a new Republican majority in the House of Representatives takes office.

The U.S. Senate on Tuesday approved a compromise bill to fund the government until March 4, 2011. After that, Republicans will have the chance to push through dramatic budget cuts.

“Today, we must balance our efforts to accelerate economic recovery and job growth in the near term with continued efforts to address the challenges posed by the long-term deficit outlook,” Treasury Secretary Timothy Geithner said in a letter accompanying the report. “The administration’s top priority remains restoring good jobs to American workers and accelerating the pace of economic recovery.”

Among key differences between the operating deficit and the cash deficit were sharp increases in costs accrued for veterans’ compensation, government and military employee benefits and anticipated losses at mortgage finance giants Fannie Mae and Freddie Mac.

The biggest increase in net liabilities in fiscal 2010 stemmed from a $1.477 trillion increase in federal debt repayment and interest obligations, largely to finance programs to stabilize the economy and pull it out of recession.

The federal balance sheet liabilities do not include long-term projections for social programs such as Medicare, Medicaid and Social Security, but these showed a positive improvement.

The report said the present value of future net expenditures for those now eligible to participate in these programs over the next 75 years declined to $43.058 trillion from $52.145 trillion a year ago — a change attributed to the enactment of health-care reform legislation aimed at boosting coverage and limiting long-term cost growth.

The overall projection, including for those under 15 years of age and not yet born, is much rosier, with the 75-year projected cost falling to $30.857 trillion from last year’s projection of $43.878 trillion.

The report noted, however, that there was “uncertainty about whether the projected reductions in health care cost growth will be fully achieved.”