– Meredith Whitney on CNBC: ‘I Haven’t Been This Bearish in a Year’; ‘S&P Expensive Across the Board’; Expects Next Leg Down in the Housing Market Soon

Overdrawn American cities could face financial collapse in 2011, defaulting on hundreds of billions of dollars of borrowings and derailing the US economic recovery. Nor are European cities safe – Florence, Barcelona, Madrid, Venice: all are in trouble 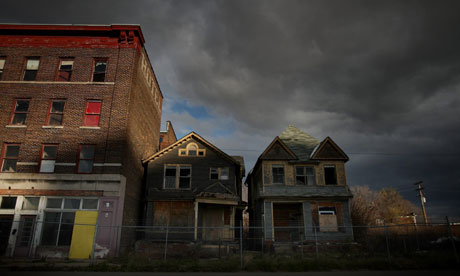 Shuttered homes and businesses in downtown Detroit, Michigan. American cities and states have debts that could be as high as $2tn. Photograph: Spencer Platt/Getty ImagesMore than 100 American cities could go bust next year as the debt crisis that has taken down banks and countries threatens next to spark a municipal meltdown, a leading analyst has warned.

Meredith Whitney, the US research analyst who correctly predicted the global credit crunch, described local and state debt as the biggest problem facing the US economy, and one that could derail its recovery.

“Next to housing this is the single most important issue in the US and certainly the biggest threat to the US economy,” Whitney told the CBS 60 Minutes programme on Sunday night.

“There’s not a doubt on my mind that you will see a spate of municipal bond defaults. You can see fifty to a hundred sizeable defaults – more. This will amount to hundreds of billions of dollars’ worth of defaults.”

New Jersey governor Chris Christie summarised the problem succinctly: “We spent too much on everything. We spent money we didn’t have. We borrowed money just crazily. The credit card’s maxed out, and it’s over. We now have to get to the business of climbing out of the hole. We’ve been digging it for a decade or more. We’ve got to climb now, and a climb is harder.”

American cities and states have debts in total of as much as $2tn. In Europe, local and regional government borrowing is expected to reach a historical peak of nearly €1.3tn (£1.1tn) this year.

Cities from Detroit to Madrid are struggling to pay creditors, including providers of basic services such as street cleaning. Last week, Moody’s ratings agency warned about a possible downgrade for the cities of Florence and Barcelona and cut the rating of the Basque country in northern Spain. Lisbon was downgraded by rival agency Standard & Poor’s earlier this year, while the borrowings of Naples and Budapest are on the brink of junk status. Istanbul’s debt has already been downgraded to junk.

Whitney’s intervention is likely to raise the profile of the issue of municipal debt. While she was an analyst at Oppenheimer, the New York investment bank, in October 2007 she wrote a damning report on Citigroup, then the world’s largest bank, predicting it would cut its dividend. She was criticised for being too pessimistic but was vindicated when the bank was forced to seek government support a year later. She has since set up her own advisory firm and is rated one of the most influential women in American business.

US states have spent nearly half a trillion dollars more than they have collected in taxes, and face a $1tn hole in their pension funds, said the CBS programme, apocalyptically titled The Day of Reckoning.

Detroit is cutting police, lighting, road repairs and cleaning services affecting as much as 20% of the population. The city, which has been on the skids for almost two decades with the decline of the US auto industry, does not generate enough wealth to maintain services for its 900,000 inhabitants.

The nearby state of Illinois has spent twice as much money as it has collected and is about six months behind on creditor payments. The University of Illinois alone is owed $400m, the CBS programme said. The state has a 21% chances of default, more than any other, according to CMA Datavision, a derivatives information provider.
Overdrawn American cities could face financial collapse in 2011, defaulting on hundreds of billions of dollars of borrowings and derailing the US economic recovery. Nor are European cities safe – Florence, Barcelona, Madrid, Venice: all are in trouble

California has raised state university tuition fees by 32%. Arizona has sold its state capitol and supreme court buildings to investors, and leases them back.

Potential defaults could also hit Florida, whose booming real estate industry burst two years ago, said Guy J. Benstead, a partner at Cedar Ridge Partners in San Francisco. “We are not out of the woods by any stretch yet,” he said.

“It’s all part of the same parcel: public sector indebtedness needs to be cut, it needs a lot of austerity, and it hit the central governments first, and now is hitting local bodies,” said Philip Brown, managing director at Citigroup in London.

In Europe, where cities have traditionally relied more on bank loans and state transfers than bonds, financing habits are changing. The Spanish regions of Catalonia and Valencia have issued debt to their own citizens after financial markets shut their doors because of the regions’ high deficits. Moody’s cut to the rating of the Basque country on Friday left it still within investment grade but noted “the rapid deterioration in the region’s budgetary performance in recent years”. It said it expected it to continue over the medium term.

In Italy, Moody’s and S&P have threatened to downgrade Florence, while Venice has been forced over the past few months to put some of the palazzi on its canals up for sale to fund the deficit.

“Cities are on their own. Governments won’t come to their rescue as they have problems of their own,” said Andres Rodriguez-Pose, professor of economic geography at the London School of Economics. “Cities will have to pay for their debts, and in some cases they will have to carry out dramatic cuts, such as Detroit’s.”

Vallejo, a former US navy town near San Francisco, is still trying to emerge from the Chapter Nine bankruptcy protection it entered in 2008.The city, now a symbol of distressed local finances, is still negotiating with the unions, which refused to accept a salary cut plan two years ago. Paul Dyson, an analyst with the Standard & Poor’s credit agency, said Vallejo, which is mostly a dormitory town for Oakland or San Francisco employees, did not have enough local industry to sustain its finances and property tax – a major source of local income – plunged with the collapse of the real estate market. The S&P credit-rating agency has a C rating on the town – the lowest level.

With a population of about 120,000, Vallejo has $195m (£125m) of unfunded pension obligations and has to present a bankruptcy-exit plan to a Sacramento court by 18 January. Since 1937, 619 local US government bodies, mostly small utilities or districts, have filed for bankruptcy, Bloomberg News recently reported. US cities tend to default more than European municipalities as they usually rely on bonds issued to investors, which enter into a default if the creditor misses payments. European towns, by contrast, traditionally depend on bank loans and government bailouts.