GMO oranges, China, and the loss of another piece of America’s agricultural base 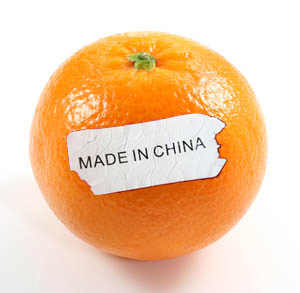 America’s oranges are now in the crosshairs of a genetic modification juggernaut that is sweeping this country and leaving in its wake a swath of destruction so wide and so utterly decimating that recovery seems a distant dream.

The genetic modification of corn and soy has succeeded in infiltrating nearly every processed food in America, with wheat and alfalfa soon to be next. Now it’s oranges. But why?

The orange is the second most profitable fruit crop in America after the grape. Valued at 1.5 billion in 2009, it accounts for 1/6 of all fruit and nut cash receipts. Because it requires a tropical or subtropical climate to flourish, commercial orange production is limited to just four states: Florida, California, Texas and Arizona.

While California does produce the majority of the fresh fruit, Florida dominates the orange juice market. And since orange juice is far more popular than fresh oranges, the Sunshine State rules the orange industry. At last count, more than seventy percent of the oranges grown in America are Florida oranges.

Florida orange juice is the single most profitable and distinctive fruit product in the state. The industry is responsible for over eighty percent of the US supply. As a result, America rarely imports orange juice. (Halegroves.com)

It only makes sense for the biotech industry to go after the largest and most profitable crops. The bigger the crop the better. Why waste time on smaller crops when the larger ones produce more income, and provide more control over production and distribution?

The excuse that is being used for this genetic takeover of the orange industry is a disease called “greening.”

Citrus greening, also known as huanglongbing (HLB) or yellow dragon disease, is one of the most serious citrus diseases in the world. It is a bacterial disease that greatly reduces production, destroys the economic value of fruit, and can kill trees. (APHIS Factsheet PDF )

An insect called a psyllid spreads the disease. This disease was detected in Florida in 2005.

The Asian citrus psyllid, which has been detected in the United States, bears the scientific name Diaphorina citri Kuwayama and is widely distributed in southern Asia and parts of Mexico and Brazil. (APHIS Factsheet)

But the USDA is not interested in these natural alternatives.

Southern Gardens is a unit of Florida-based U.S. Sugar Corp and it has been working, under field trial permits issued by the USDA’s Biotechnology Bioregulatory Services arm, with researchers at Texas A&M University and a Florida company called Integrated Plant Genetics on the development of transgenic greening-resistant trees.

Mirkov’s own work, which he said could lead to the first commercial plantings in as little as three years, involves inserting a few genes from a plant that he identified only as “commonly consumed around the world,” into citrus trees to make them resistant to greening. (Reuters)

Not only are genetically modified orange trees being touted as the savior of America’s orange industry, but research for this technology is being outsourced to China.

In a bid to curb overall costs, but also to accelerate research, Arnold said an agreement with the Fujian Academy of Agricultural Sciences in China was being used to conduct some of the more labor-intensive work into psyllids, citrus germplasms and disease resistance.

“The labor in China is reasonable and inexpensive, so we’re taking advantage of that,” Arnold said. “They can hire a whole line of technicians, maybe 70 technicians and line them up, for the same amount of money that it would take us to hire three or four,” he said. (Reuters)

And if that doesn’t make you mad, consider that when China faced this same problem, they solved it by natural means.

“In some places in China they essentially went to a scorched-earth policy and then came back in and replanted with healthy materials and implemented area-wide pest control strategies,” Gmitter said.

China conquered greening without biotechnology! So why do we need GMO oranges? The answer is, we don’t. However, the biotech giants would like this very, very much. And they don’t care what country begins the assault.

In fact, the labor is so cheap in China, that it is only logical to assume that China is now being set up to take over orange production just like it did with apples. And those oranges will be transgenic if the USDA gets its way.

He said China could become the world’s leading orange juice producer in as little as 10 years, with or without GMO crops, thanks to advantages including lower land and labor costs. (Reuters)

Fifteen years ago, China grew fewer apples than the United States. Today, it grows five times as many – nearly half of all apples grown in the world.

China’s advantage is its cheap labor. A picker makes about 28 cents an hour, or $2 a day, according to the U.S. Apple Association. In 2005, workers in Pennsylvania made about $9 to $10 per hour, and those in Washington State about $14 per hour, the association said. (NY Times)

It is also interesting to note that the U.S. government classified citrus greening among “potential bioterror tools known as ‘select agents’ until about two years ago, severely limiting the scientific community’s ability to conduct research into the organism”  (Reuters).

This astounding information raises the following questions: Did the government intentionally keep people in the dark about this disease, so that no research could be done until the time was right and genetic modification could rush in and “solve” the problem? Why are we hearing that the greening problem is insurmountable by natural methods when China has proven otherwise? And last but not least, other than the obvious factor of cheap labor, why is genetic modification research being outsourced to China when the Chinese obviously do not need it if that county is not being set up to take control of orange production, which would essentially put us out of the orange business and force us into even more reliance on imported food? Wouldn’t it be safer if this research is conducted in the United States so that this proprietary technology could be kept local for America’s growers?

If China conducts the genetic research on a biotech solution to greening, and applies that research to its orange groves, then takes over the orange market like it did with apples, we not only lose another piece of an ever-decreasing agricultural base in this country, but our reliance on imported food will increase, and more jobs will be lost. Not to mention that another natural, healthy crop bites the dust through genetic modification.

4 thoughts on “The GMO Orange Scandal”