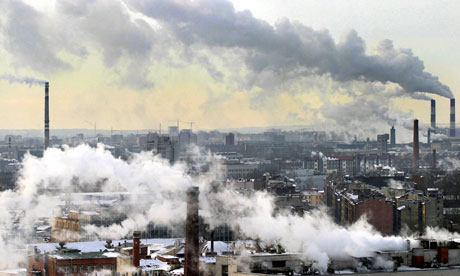 Chimneys billow smoke over St Petersburg. At the Cuncún climate change summit Russia said it would not renew its commitment to the Kyoto protocol beyond 2012. Photograph: Sergey Kulikov/AFP/Getty Images

The UN climate change conference in Cancún – and the future of the Kyoto protocol – was cast into doubt today after Russia said it would not renew its commitment to the treaty that has governed climate negotiations for more than a decade.

In a late-night plenary session, Russia’s climate change envoy, Alexander Berditsky, said his country opposed a renewal of Kyoto beyond its 2012 end date.

“Russia will not participate in the second commitment period of the Kyoto protocol,” he said in a prepared statement.

The announcement, delivered in what were supposed to be the final 24 hours of the summit, makes it even more unlikely negotiators will be able to produce a strong outcome at Cancún, environmental groups said.

After last year’s failure at Copenhagen, a weak result – or outright collapse – of talks at Cancún would damage the credibility of the entire UN negotiating process, the energy secretary Chris Huhne warned.

“Next year people will say, well, we’re not going to make any progress and we end up with a zombie conference where there won’t be anybody at a senior enough level to take any serious decisions at all.”

Negotiators were planning to meet through the night to try to resolve the difference. But Russia’s announcement further cements the divide between rich and poor countries over the future of the agreement following a statement from Japan at the start of the talks that it too would not sign an extension of Kyoto.

Japan reiterated its opposition on Thursday night, with negotiator Akira Yamada saying a renewal of Kyoto was “not an appropriate way or an effective way or a fair way to tackle climate change”.

Canada is also believed to oppose extending the Kyoto agreement.

Russia’s statement had been much anticipated. As Berditsky noted: “Russia has repeatedly stated, including at the highest political level, that the adoption of commitments for the second commitment period under the Kyoto protocol as it stands now would be neither scientifically, economically or politically effective.”

But the announcement so late in the talks risks overwhelming progress made elsewhere at Cancún on agreements to preserve tropical rainforests and on climate finance.

Instead, ministers spent much of Thursday trying to devise a strategy for overcoming the divide over the future of Kyoto.

Developing countries say Kyoto is essential as the only international agreement requiring industrialised countries to reduce their emissions. “A second commitment period is a must in the outcome,” said Brazil’s climate change negotiator, Luiz Figueiredo.

But some developing countries have also admitted they were open to a fudge – deferring the question of Kyoto’s future to next year’s climate summit in South Africa.

In addition, the EU climate commissioner, Connie Hedegaard, has also been circulating a proposal – backed by small island states – that would circumvent the issue of Kyoto.

Even without the fight over Kyoto, the UN summit is facing all-night negotiating tonight to try to produce even modest areas of agreement.

There were divisions over the ambition and governance of a green fund to help developing countries buy the technology they need to reduce their emissions and protect their people from rising seas and drought.

There was also a stand-off between China and America on the sensitive issue of monitoring and verifying emissions reductions.