US manufacturer in the dock after disguise is linked to robberies. 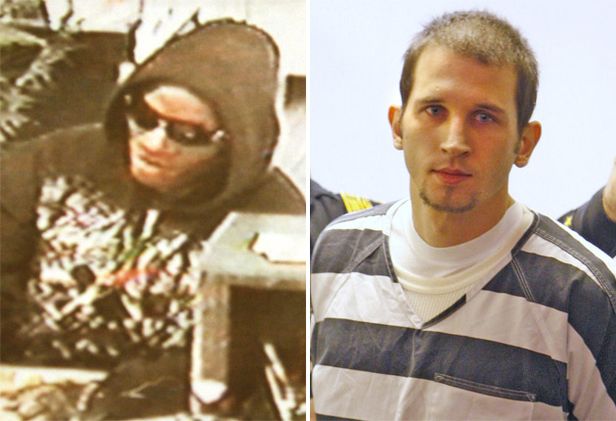 Conrad Zdzierak, right, used a black SPFX mask, left, in one of a string of robberies. The mask was so lifelike that police initially arrested a black man. Zdzierak called his character ‘The Player’ and police also found a mask of an elderly man in his apartment

A company that sells “movie quality” silicone masks that incorporate human hair to achieve what its adverts call “ultra high realism” is at the centre of a snowballing police investigation after detectives discovered that it had become the favoured supplier of disguises to America’s most wanted bank robbers.

The Los Angeles company SPFX Masks, set up to cater to the film industry, said yesterday that it is “proud” of the fact that its range of hand-painted products look realistic, “but not proud of the way they are being used” after learning that they had been linked to a string of unsolved crimes.

In Ohio, a Polish immigrant called Conrad Zdzierak last week pleaded guilty to using one of the masks to transform himself from a 30-year-old white man into a black character he called “The Player,” who carried out a string of robberies in the state.

The disguise was so effective that local police mistakenly arrested a young African American for the crimes, holding him in custody for several months. Witnesses, including six out of the seven bank employees who took part in a photo line-up, went so far as to wrongly identify the innocent black man as the culprit.

“We showed the picture [of the masked perpetrator] to his mother, and even she thought it was him,” the detective in charge of the case, Keenan Riordan, told reporters. After that little misunderstanding had been ironed out, Zdzierak was convicted on six counts of robbery.

Authorities are now starting to wonder if the notorious “Geezer Bandit,” an elderly man who has held up a string of banks in Southern California, might actually be a younger person wearing one of the SPFX masks, which retail for between $600 and $1,200 (£760).

The products are hand-made by a crew of six craftsmen who use a special variety of silicone that looks and feels like skin, down to its individual pores. They are individually painted, again by hand, and finished with real human hairs which are individually stitched in place. Customers of SPFX have included the makers of the horror film Hallows Point, along with costume designers at a Six Flags theme park.

Wearing the masks is like being in Mission Impossible, the company’s owner, Rusty Slusser, told the Los Angeles Times this week. “You pull [them] over your head one time and that’s it. It’s like a 10-hour make-up job in 10 seconds.”

In October a Chinese man seeking asylum in Canada used one of the masks to disguise himself as an elderly male as he negotiated airport security in Hong Kong. “We’re very embarrassed this has happened,” said Slusser, of his company’s sudden notoriety. “We were shocked that this happened.”

The masks, which have only been on the market for a couple of years, are particularly effective because they move in synch with facial muscles. Several Hollywood stars have even used them to evade paparazzi, claimed Slusser, though he declined to mention names.

Zdzierak can no doubt testify to their effectiveness. He would have got away with his crimes had his girlfriend not gone to the police after finding a large stash of money and one of the masks in his hotel room. When detectives searched Zdzierak’s home, they found two masks in a safe, one of a young black man – “The Player” – and another of an ageing white man known as “The Elder”.

A search of his computer hard drive revealed videos of Zdzierak modelling “The Elder” mask and trying to speak like a person of that age. It also turned up emails he had sent to Slusser claiming to be a film producer wanting to know if a white man could pass himself off as an African American in one, and whether the silicone hand coverings sold alongside them might tear in a fight.