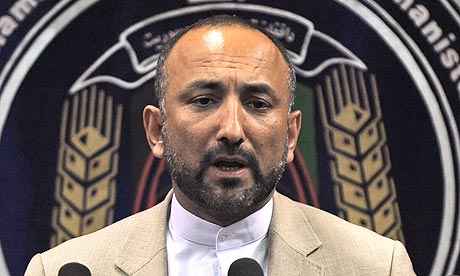 A scandal involving foreign contractors employed to train Afghan policemen who took drugs and paid for young “dancing boys” to entertain them in northern Afghanistan caused such panic that the interior minister begged the US embassy to try and “quash” the story, according to one of the US embassy cables released by WikiLeaks.

In a meeting with the assistant US ambassador, a panicked Hanif Atmar, the interior minister at the time of the episode last June, warned that the story would “endanger lives” and was particularly concerned that a video of the incident might be made public.

The episode helped to fuel Afghan demands that contractors and private security companies be brought under much tighter government control. However, the US embassy was legally incapable of honouring a request by Atmar that the US military should assume authority over training centres managed by DynCorp, the US company whose employees were involved in the incident in the northern province of Kunduz.

There is a long tradition of young boys dressing up as girls and dancing for men in Afghanistan, an activity that sometimes crosses the line into child abuse with Afghans keeping boys as possessions.

Although rarely discussed or criticised in Afghanistan, it is conceivable that the involvement of foreigners could have turned into a major public scandal. Atmar himself warned about public anger towards contractors, who he said “do not have many friends” and said they needed far greater oversight.

He also said tighter control was needed over Afghan employees of such companies as well.

“He was convinced that the Kunduz incident, and other events where mentors had obtained drugs, could not have happened without Afghan participation,” the cable said.

Two Afghan policemen and nine other Afghans were arrested as part of investigations into a crime described by Atmar as “purchasing a service from a child”, which the cable said was against both sharia law and the civil code.

He insisted that a journalist looking into the incident should be told that the story would endanger lives, and that the US should try to quash the story. But US diplomats cautioned against an “overreaction” and said that approaching the journalist involved would only make the story worse.

“A widely-anticipated newspaper article on the Kunduz scandal has not appeared but, if there is too much noise that may prompt the journalist to publish,” the cable said.

The strategy appeared to work when an article was published in July by the Washington Post about the incident, which made little of the affair, saying it was an incident of “questionable management oversight” in which foreign DynCorp workers “hired a teenage boy to perform a tribal dance at a company farewell party”.

In fact, the episode was causing palpitations at the top of government, including in the presidential palace.

The cable records: “Atmar said that President Karzai had told him that his (Atmar’s) ‘prestige’ was in play in management of the Kunduz DynCorp matter and another recent event in which Blackwater contractors mistakenly killed several Afghan citizens. The President had asked him ‘Where is the justice?'”

According to a separate cable both incidents helped fuel Afghan government demands “to hold a tighter rein over [private security companies]” – a demand that also led Atmar to offer that the overstretched police should take over protection for military convoys in the south of Afghanistan.

Earlier this year Karzai issued a decree calling for the dissolution of all private security companies by the end of the year, an edict that has since been slightly watered down.

In a meeting between Atmar and the assistant ambassador Joseph Mussomeli, the US diplomat said he was deeply upset by the incident and that the embassy was considering Afghan demands that the US military should beginning overseeing the DynCrop operations.

Privately, however, they knew that such an arrangement was not “legally possible under the DynCorp contract”.