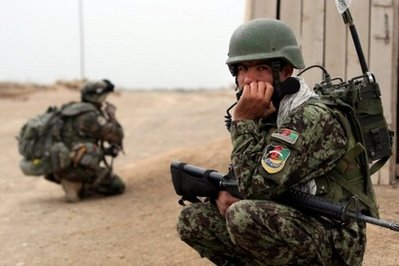 KABUL (Reuters) – Afghan security forces are freeing captured senior Taliban for payment or political motives, with President Hamid Karzai and his powerful brother among those authorising and requesting releases.

The practice is so systemic that the Taliban have a committee focused on getting their fighters out of jail. It undermines the deterrent effect of arrest and the potential of the prisoner population as a card to play in peace talks, analysts say.

The releases, which were confirmed to Reuters by several sources familiar with a range of cases, also raise questions about the capacity and political will of Afghan security forces meant to be taking over from foreign troops starting next year.

U.S. forces will begin drawing down numbers from next July and NATO hopes to meet Karzai’s 2014 target for all security to be provided by Afghan police and military.

But cases uncovered by Reuters including that of Ghulam Haidar, a top insurgent in the southern Taliban heartland of Kandahar, suggest that a web of complex loyalties and widespread corruption are undermining the fight against the insurgency.

Ghulam Haidar, meaning “servant of God”, is a common name in Afghanistan so when Canadian forces turned one of the most dangerous men in Kandahar city over to their Afghan counterparts in March, they may not have realised who he was.

Days later he was walking free again, according to three sources who have investigated prisoner releases or have seen documents about Haidar’s capture. They asked not to be named because they are not authorised to release information.

“They took this guy into custody in mid-March, but he was out again in a few days. This is a classic example of what has been happening,” one former Western official told Reuters.

A Kabul-based source with links to Western intelligence services confirmed Haidar was a Taliban leader known to have a major role in the insurgency around the city.

Yet his freedom was requested by Karzai’s younger brother Ahmad Wali Karzai, head of the Kandahar provincial council.

Dubbed “AWK” by Westerners working in Kandahar, he has an iron grip on the city but his loyalties are considered less solid. A U.S. government cable dated 2009, released by WikiLeaks, described him as a corrupt drug trafficker.

“When Ghulam Haidar was in (Afghan) custody AWK asked for his release,” said a second source, who rejected the idea that Haidar could have been set free because he was a double agent.

“If the Afghan government had good agents within the Taliban things should have gotten better — but that is obviously not the case,” the source added.

Ahmad Wali Karzai said he had never asked for the release of a Taliban prisoner and had not heard of Ghulam Haidar.

“I am the person most wanted by the Taliban, with nine suicide attacks against me,” he told Reuters by telephone.

“I would be the last person to release the Taliban — my position is for more tough measures against them.”

The Defence Ministry and National Directorate of Security, President Karzai’s office and the NATO-led International Security Assistance Force all declined to respond to questions on Ghulam Haidar’s case or the wider issue of Taliban releases.

A spokesman for the Interior Ministry, which controls the police, said it had not been involved in release of any Taliban.

“We have no evidence and no examples that detained Taliban were released by government officials,” Zemarai Bashary said.

Haidar was one of the most high-profile insurgents in recent years to slip through prisoner release mechanisms that are designed to prevent innocent men from languishing in prison but are regularly exploited by the Taliban to free key commanders.

“The Taliban operate a commission for prisoners affairs and effecting releases is among its responsibilities,” said Michael Semple, a Harvard University fellow with over 20 years experience in Afghanistan and extensive contacts with the Taliban.

“It’s systemic. It is well beyond the level of having the occasional success,” he added.

Another source also confirmed the committee’s existence, although in practical terms most release operations were conceived and directed at the local level.

In cases like Ghulam Haidar, political connections are key.

One of the most high-profile examples in recent years was the 2007 release of Dastagir, a Taliban leader from northwestern Badghis province. President Karzai himself ordered the commander freed after village elders promised he would renounce violence.

His return to battle united feuding Taliban factions and he was personally responsible for the deaths of at least 32 Afghan policemen in attacks he organised before he was killed in 2009, said a government source from western Afghanistan.

One source told Reuters Ahmad Wali Karzai had paid tens of thousands of dollars to secure the release of another Taliban commander, Anwar Shah Agha, who operates in the area to the west of Kandahar city and was captured in May 2009.

He was released by Afghan security forces in Kabul in March 2010, and has since returned to the battlefield.

Some Taliban are freed legally but with a worrying lack of transparency, said Kate Clark, senior analyst at Afghanistan Analysts Network who has studied Taliban releases. She cited the case of Akbar Agha freed late last year by Karzai.

“He was pardoned secretly and is now living under semi-house arrest. He was quite senior, and put away for kidnapping UN staff including a British woman,” Clark said.

“Pardoning criminals is a constitutional right of the president’s, but the lack of transparency, the fact that he does not necessarily announce the pardons, is concerning for anyone looking at it from a rule-of-law perspective.”

After nearly a decade of war, Karzai and the West are looking for a political solution to the conflict and prisoner release is intended as part of that. But it may do more to fuel violence.

“They have a sufficiently high success rate to boost Taliban fighters’ confidence. The threat of arrest has lost its deterrent value as they are confident of being sprung,” Semple said.

The insurgency is at its strongest across Afghanistan since the 2001 ouster of the Taliban, with civilian and military casualties at record highs despite the presence of 150,000 foreign troops, and violence reaching previously peaceful areas.

The releases may also undermine morale at a critical time.

“What are we really fighting for? We risk our lives to catch them and bring them in and then they just release them,” said a Kabul-based source who followed the Ghulam Haidar case.

The releases attracted the notice, and anger, of Karzai’s Western backers, according to a cable released by WikiLeaks.

“Both (Karzai and the attorney general) authorise the release of detainees pre-trial and allow dangerous individuals to go free or re-enter the battlefield without ever facing an Afghan court,” the August 2009 cable from the embassy in Kabul said.

It goes on to list 150 pre-trial releases from one Afghan detention facility since 2007, including 27 prisoners who had been held at Guantanamo Bay by the United States.

The complex lines of the Afghan conflict also mean today’s enemy can be tomorrow’s friend. Ghulam Haidar, for example, is from the Popalzai tribe like the Karzais. Tribal loyalties run deep in Afghanistan.

“Karzai thinks that by releasing prisoners he is speeding up the process of talks with the Taliban and trying to win their confidence. But so far these confidence building measures have been pretty one-sided,” said author Ahmed Rashid.